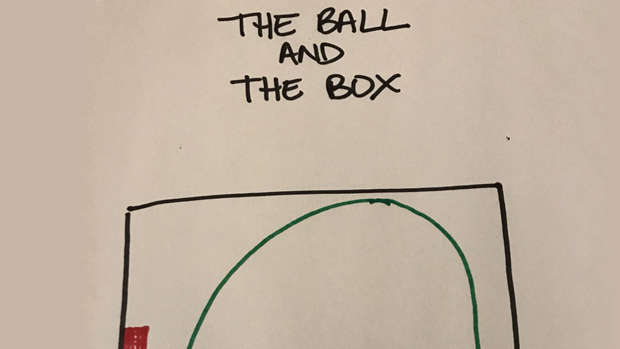 Lucky are those who have never had to experience grief, a complex emotion with many, varied, equally overwhelming stages.

Grief is hard to understand, especially if you've never been through it.

But one woman has gone viral on Twitter with an analogy that people say is the perfect way to explain grief.

Lauren Herschel sums up grief using "the ball and the box" analogy.

After what has been a surprisingly okayish Christmas, I had a moment today in SuperStore. Saw a lady who reminded me of my 92yo grandma, who even in the early stages of dementia, completely understood that my mom died.
I thought I’d share the Ball in the Box analogy my Dr told me pic.twitter.com/YfFT26ffU8

So grief is like this:
There’s a box with a ball in it. And a pain button.
And no, I am not known for my art skills. pic.twitter.com/XDwCCdXVkc

The theory, she says, was first shared by her doctor, used to describe how the brain triggers feelings of grief.

"I thought this was the best description of grief I've heard in a long time."

"I told my step dad about the ball in the box (with even worse pictures). He now uses it to talk about how he's feeling.

In the beginning, the ball is huge. You can’t move the box without the ball hitting the pain button. It rattles around on its own in there and hits the button over and over. You can’t control it - it just keeps hurting. Sometimes it seems unrelenting. pic.twitter.com/Wcas2p4vab

Over time, the ball gets smaller. It hits the button less and less but when it does, it hurts just as much. It’s better because you can function day to day more easily. But the downside is that the ball randomly hits that button when you least expect it. pic.twitter.com/fevAttojBg

"The Ball was really big today. It wouldn't lay off the button. I hope it gets smaller soon."