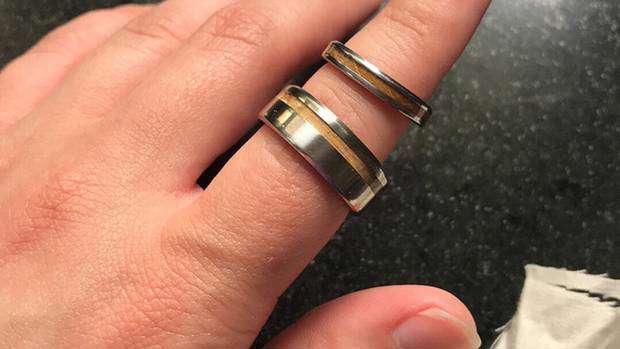 A newly-married woman has shared her shock at finding out that her new mother-in-law had bought her husband a replacement for the wedding band they chose.

The woman told her story on Reddit, saying that she felt like her mother-in-law would rather be the one married to her son.

"Before we got married, our MIL (mother-in-law) asked to see the bands we chose. We were both really excited to show her. I was able to get barrel staves from the very first brewery we ever visited together and a ring maker I've been obsessed with for years made them into bands for us."

It seems that everyone was as excited about the design, as the new bride found when a package arrived at their home after the wedding.

"I got home from work to a small package on the porch addressed to DH (dear husband). He didn't order anything and we thought maybe it's a delayed wedding gift? Who knows." The matching rings chosen by the couple. Photo / Reddit

The truth was much worse, with the shocked couple finding a men's wedding band and a small note from the man's mother, which read: "I saw this band and thought of you. I think it's much more your style than the band you have. I got it in your size, but let me know if it fits. Love, Mum xxxooo".

The enraged woman sent the ring back and decided to hold her tongue until the next time they met in person.

"DH and I walk in and she's pretending to be sickly sweet. She brings out the box that we sent back and couldn't figure out what part of our address she got wrong, why it got returned to her.

"Before I could even open my mouth, DH stepped in. It was kind of a monologue that ended with her pouting and huffing like a child."

The woman wrote that hubby stepped up and told his mother that her actions were "wildly inappropriate", warning her not "pull a stunt like that again".

The mother-in-law's actions were even a shock to her husband, who apologised profusely to the couple as he walked them to their car.

In a disturbing twist, comments on Reddit reveal that the mother-in-law's actions are not unique.

"My MIL had a matching ring made for herself to look like my husband's custom-made wedding band. I had designed his wedding band myself. I'm still pissed about it," wrote one woman.

Another recalled her mother-in-law's creepy Christmas gift for her husband on their first Christmas as man and wife.

"DH, bless his heart, was trying to be polite as MIL gushed over how special it was and how there's sooo much meaning behind this gift and she just wanted him to have a special piece of jewellery from HER to wear. She also had it engraved with a dumb quote about mother and son," she wrote.

"Sorry MIL, but gross giving your son a ring months after his wedding. Such a disgusting overstep and weird thing to do."