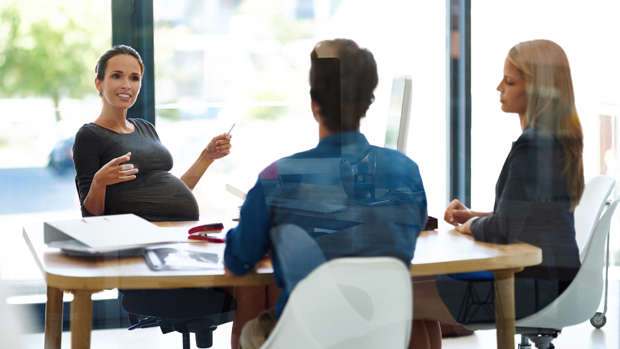 Asking if a woman is pregnant has always been a big no-no, as is telling her what to eat, or talking about her expanding belly.

But what if you had a genuine reason to believe that she was making the whole thing up and wasn't really pregnant?

A woman on popular parenting forum Mumsnet suspected just that about her colleague. She believed the woman was lying about her pregnancy to get put on light duties at work.

The post read: "There was some confusion initially about dating and her saying she had a miscarriage then didn't that was all a bit suspicious but no one said anything.

"She then stated last week she went for her 12-week scan and there was no baby to be found and she was to come back the next day for another scan."

The woman went on to explain that she asked her colleague how her scan went via Facebook. She received a picture of a scan, which the colleague said went "great".

Some key points on the scan heightened the woman's suspicion. Personal information that is usually printed on the top had been cut off and the date of the scan was 2015.

Confused, she fished for more information about her colleague, who she noted had "quite a rep for lying about things."

She wrote: "She has other children and I was a bit suspicious so I checked her previous Facebook photos and found it was the exact scan of her previous child."

The woman, higher up in the business than her 'pregnant' colleague, divulged to Mumsnet that she felt obliged to tell management what she'd uncovered. She said other colleagues were being made to do more work, picking up slack for the "pregnant" colleague.

"It will all come out eventually regardless," she surmised, "but I see my other colleagues picking up the slack and feel quite bad that it's all potentially made up? Would you go to the manager or just leave it?" she asked.

Many responses encouraged the woman to report the potential fraudster.

"Go to the manager," one person advised, adding, "I used to work with a compulsive liar. As well as all the bullsh*t 'sick' days she stole quite a bit of money from the company before she was caught."

However, a few responses were more sympathetic. Some wondered if the woman may have other issues she needed support with.

"Obviously it will all be resolved soon enough," wrote one. "Just in case there has been some kind of miscarriage or there are problems I would hold off doing anything for now. Give it a couple of weeks and if you still have concerns speak to your manager."