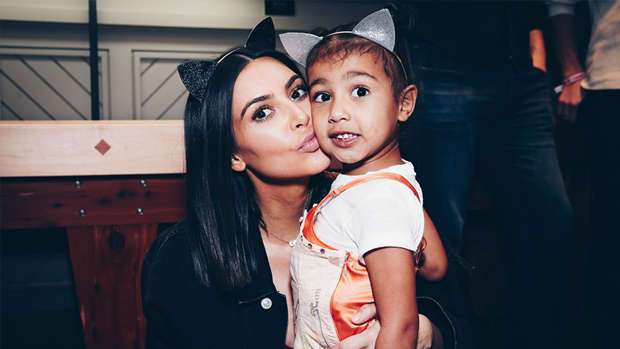 Kim Kardashian has hit back at her critics after photos of North West wearing a dress that looks like a corset prompted outrage on social media.

According to Daily Mail, shocked users had earlier questioned why the reality star and her husband Kanye let their four-year-old daughter step out in the accessory.

North can be seen in photos taken earlier this week walking on the street in New York in what looked like a corset on top of a peach-coloured dress. The outfit, which has a purple flower on it, wraps loosely around her chest and has laces crisscrossing in the front.

Kim said on Wednesday night the dress just looks like a corset and 'she would never' put her daughter in one.

I would never put my daughter in a corset!It's a dress I bought that is a cotton fabric that laces up & looks like a corset! Just decoration pic.twitter.com/hZzZLs04sM

'This dress that I did not design, I actually bought, is not a corset it's just fabric on the front,' she said in a video.

'So, I think it's really cute, I bought it from a designer and it's just fabric people, it's not a real corset.'

She also tweeted: 'I would never put my daughter in a corset! Relax it's a dress I bought that is fabric that laces up and looks like a corset!'

Corsets are designed to sexualise the female body and are often worn by burlesque dancers - and many social media users say the item is inappropriate for a child so young. The clothing cinches a woman's waist to make them look smaller and enhance their bottom.

Kim herself has advertised waist trainers, a type of corset, on social media, and credited them with helping shape her hourglass figure.

Doctors, however, have warned against waist trainers and pointed out that they could cause serious damage to internal organs.

In North's case, social media users were outraged that Kim and Kanye could let their four-year-old daughter step out of the house wearing such an adult garment.

As photos of North wearing the corset began circulating on Instagram, some users slammed the outfit in concerned comments.

North West looking at other kids wondering what it's like to dress normal pic.twitter.com/NzkQhWDQJk

Someone else worried that the outfit might attract sexual predators, while some called the accessory "ridiculous" on a little girl.