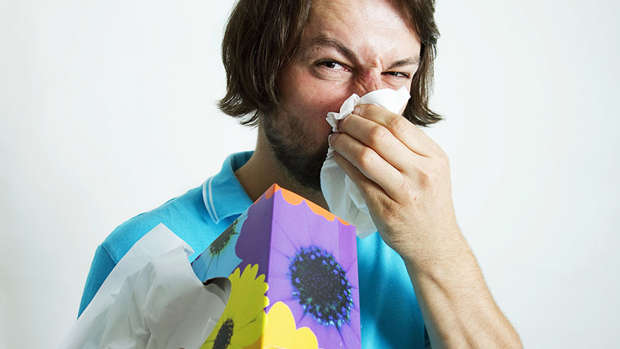 A senior lecturer from The University of Queensland has said that you could be blowing your nose the wrong way.

David King has brought forward the idea that habits you have now could be causing some damage.

'On balance it seems repeated and vigorous blowing of the nose may carry more risk than benefit, even though it seems to be a natural response to nasal congestion,' he wrote for The Conversation.

'So looking to remove the need to blow so forcefully is probably a better option'.

Mr King explains that there have been cases of people blowing their noses so hard that they have caused damage due to the pressure they created.

'In most of these cases people had underlying chronic sinusitis or an existing weakness in the structure they damaged after blowing too hard,' he said.

People have fractured the base of their eye sockets, had severe headaches and have forced air into the tissue between the two lobes of the lung.

Mr King understands why people blow their noses so hard as when mucus is kept in the nose not only does it cause irritation, but it also has a chance of moving to the throat to create a cough.

'If you have mucus in the nose, it is probably best to get it out, so blow gently or by clearing one nostril at a time. Use of appropriate treatments can lessen the need to blow, and the force required to clear your nose,' he said.

Mr King recommends people buying decongestant sprays, saline nose sprays and performing a technique called nasal aspiration, which is when you squirt liquid saline up your nose to flush out mucus and debris.

'If you are repeatedly blowing your nose you probably have a nasal condition, like hay fever or sinusitis, which should be treated more comprehensively,' he said.

A previous MailOnline article states that we sneeze due to triggers such as dust, pollen and germs.

This is because we want to remove things from our nasal passages we don't like.

According to Professor Jeremy Ward, a respiratory physiologist at King's College London, due to the irritation air is forced out through the nose and mouth at high speed, dislodging whatever it was that tickled the nerves.

'The brainstem, where all this [information is] sent, is an incredibly complicated neural computer,' Professor Ward explained.

'What you might think is an inappropriate response is actually just a bit of leakage between systems.'