Is there anyone out there?

If you get the feeling we're not alone you could well be right, if the latest list of reported UFO sightings is anything to go by.

Over the past six years, 10 unexplained sightings have been recorded by authorities.

There's no close encounters with little green men or flying saucers, but a number of lights cannot be explained.

The most recent sighting was on March 30 this year, when an "unidentified falling light" was seen at Tasman Bay, near Nelson.

"The object was too fast for an aircraft and two slow for a meteor," say file notes, released by the Civil Aviation Authority under the Official Information Act.

Last year, there was just one citing, an "unidentified red and orange light" over Christchurch.

The southern city was also home of the only officially reported sighting in 2014.

Moving lights were seen in the Bay of Plenty and Hamilton in 2013, while a pilot in Palmerston North reported a star-shaped object flying within 120m to 150m off his wing-tip.

In 2010, an object was apparent about five kilometres off Otaki Beach, near a vintage aeroplane fly-by.

These sightings all happened since a treasure trove of lights, reports of alien invasions and other unexplained incidents were revealed when New Zealand's previously classified UFO files were unveiled.

Since then, not all unexplained sightings have been reported to authorities.

The newly released records don't include any mention of Australian film crew footage that appears to show two objects racing across the horizon near Queenstown two years ago.

Nor did the authority get word of a spate of sightings of three red lights in the summer skies over the 2012/13 holiday break. 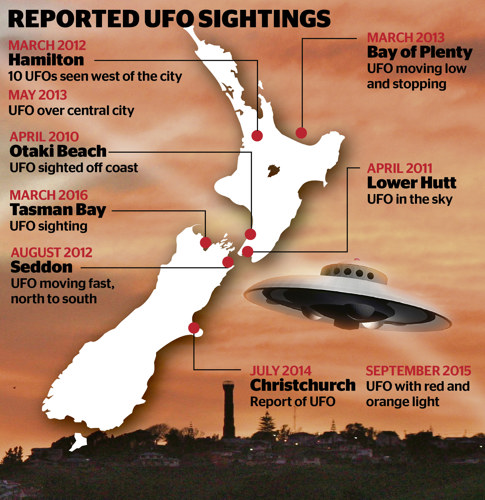 Ufocus NZ Research Network runs a comprehensive online archive of sightings reported to it, the most recent of which was "an airborne object surrounded by red strobing light" in Katikati in February.

This year, a "delta-shaped" object was also spotted above the Waitakere Ranges and orange lights were seen above Papakura on New Year's Day, according to the site.

The network's director Suzanne Hansen said most reported sightings were from the North Island, where more of the population was based and where the network was better known.

Some people were perhaps reluctant to report sightings and there was "still some resistance to the idea of UFOs", she said.

NZ Skeptics spokeswoman Vicki Hyde said 80 to 90 per cent of UFO sightings could be explained and for about 5 per cent, there wasn't enough information.

But that didn't mean they were aliens.

"UFO sightings are dropping all over the world," Ms Hyde said.

"It's a bit sad because it means we aren't being visited by aliens, which would be wonderful."

She said people who reported sightings were not stupid and shouldn't be dismissed.