The son of former All Black Bruce Reihana has spoken of his pain and loss after his girlfriend was murdered at the weekend.

Evaan Reihana is the son of Bruce Reihana, who played two tests for the All Blacks in 2000, and himself plays for France Top-14 club Bordeaux Begles. His girlfriend India Chipcase was found strangled in a home in the United Kingdom town of Northampton on Sunday (Monday NZT).

Evaan Reihana expressed his grief on Instagram, posting a photo of the dark-haired beauty and promising to dedicate his rugby career to her. 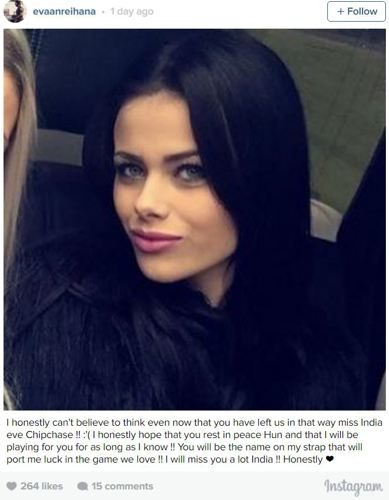 The Daily Mail reported that Miss Chipcase, the daughter of a doctor and a former private school pupil, was last seen outside a nightclub called NB, in Northhampton, early on Saturday. Police smashed down the front door of a house 6km from where Miss Chipcase lived with her mother after tracing her phone to a nearby park.

Her body was found inside and a post-mortem examination the following day confirmed she died from neck injuries, the Daily Mail reported.

Mr Tenniswood, who lives in the street where the body was found, spoke only once during the brief hearing at Northampton Magistrates' Court, to confirm that he understood the case would now be transferred to the Crown Court.

No plea was entered and Mr Tenniswood's solicitor, Derek Johnson, made no application for bail. The defendant will next appear at Northampton Crown Court on February 4.

Miss Chipchase had been working as a barmaid but was hoping to follow her father Jeremy into healthcare, and had completed a diploma in health and social care.

The family were too upset to speak about India's death, but her brother posted a message on Twitter saying: "I miss you my little angel. You'll always remain the best big sister I ever had and always hold a place deep in my heart."

Police are still trying to establish Miss Chipchase's movements on the night she went missing. She had been with friends at NB's Nightclub in Northampton until 1.15am, and is thought to have got as far as Victoria Park, around a mile away, where her phone signal went dead.

Her body was found in a house in Stanley Road, two streets away from Victoria Park.