The theft of a baby's blue blanket from a Westport mother has revealed both the hardship and heart of the community.

Sala Ioane discovered last week that the baby's blanket had been stolen from her washing line along with children's clothes.

Rather than report the theft she made a poignant plea online for the return of the blanket, the only keepsake she had for her baby Anthony who died at 11 days old in 2008.

Not only did Ioane not report the theft she also urged the person to come back and take more.

The blanket came back and with it a letter revealing the reasons for the theft.

Ioane had only recently returned to Westport from Auckland where she had had surgery for an ectopic pregnancy.

One night, soon after her return, Ioane hung out the clothes and blanket in her carport.

She said she was outside "trying to find some peace... I was having a really bad night".

The next morning she woke up to find the blanket and clothes had vanished.

Ioane then made her post on social media about the stolen items in the hope that the person who took them would read it.

In the post she said she had no intention of reporting or hurting the thief. She said she simply wanted to know if the person was ok and whether they had children who needed warm clothing so she could help. 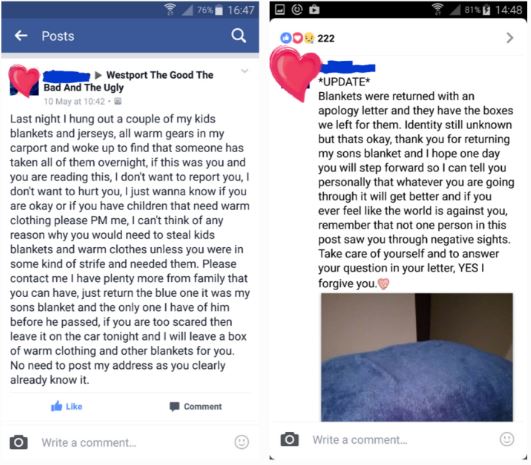 "I can't think of any reason why you would need to steal kids' blankets and warm clothes unless you were in some kind of strife... Please contact me, I have plenty more... Just return the blue one. It was my son's blanket and the only one I have [from] him before he passed."

Ioane put three boxes of blankets and clothes with no sentimental value outside her door.

That night the blanket was returned, the boxes went and a letter was left.

The writer told Ioane in her letter that she was in a time of hardship. She had been walking by and saw Ioane hanging out the items.

"[The woman] said in the letter she was in an abusive relationship and her partner had taken everything including her kids' clothes, and money from her kids' piggy-bank."

She wrote in her letter that when she saw Ioane hanging the things on her line she decided she would take them.

Ioane said she "just broke down" at the thought that someone was in a situation in which they needed to steal blankets and clothes to keep children warm.

Ioane said she understood hardship well, and there were times in her life where she might have "lashed out in anger".

Before moving to Westport lack of employment had forced her and her fiancé, Joshua Edwards, to live in a caravan fit for one person.

During that hard time Ioane's parents had housed her daughters.

"We understood all too well what it was like to struggle."

Ioane said her own hardship had strengthened her empathy.

Ioane and her family moved to Westport in January this year.

The family now enjoyed a better lifestyle than they had in the city, she said.

"[The girls] had problems with bullying in Auckland and they haven't had any of that here."

Ioane found employment with Westport Shuttles. Her fiance took on the role of the girls' father four years ago. Ioane said her family's move here had been the best decision.

"I absolutely love it here. When you're a city girl and you come to a small town that just knows how to slow time down it's pretty awesome... and the people have been amazing, we've been so welcomed."

Ioane said she she was not a perfect person herself "just a mother who can relate to real struggle and know it all too well".