Donald Trump has stood by his call to block all Muslims from entering the United States, despite the idea not being backed by a single major Republican figure.

Since the Nov. 13 attacks in Paris that killed 130 people and wounded hundreds more, a number of Republican presidential contenders have proposed restrictions on Syrian refugees " with several suggesting preference for Christians seeking asylum " and tighter surveillance in the U.S.

But Trump's proposed ban goes much further, and his Republican rivals were quick to reject the latest provocation from a candidate who has delivered no shortage of them. "Donald Trump is unhinged," Jeb Bush said via Twitter. "His 'policy' proposals are not serious."

Despite his controversial rhetoric, Trump has maintained his popularity among many Republican voters, with less than two months to go before the first 2016 primary contests. Many Republicans worry that his rise will damage the party's chances of winning the White House in November, as Hillary Rodham Clinton consolidates her own front-runner status on the Democratic side.

The Muslim ban announced by Trump Monday evening drew swift rebukes from abroad. British Prime Minister David Cameron slammed it as "divisive, unhelpful and quite simply wrong." Muslims in the United States and around the world denounced it unconstitutional or offensive. 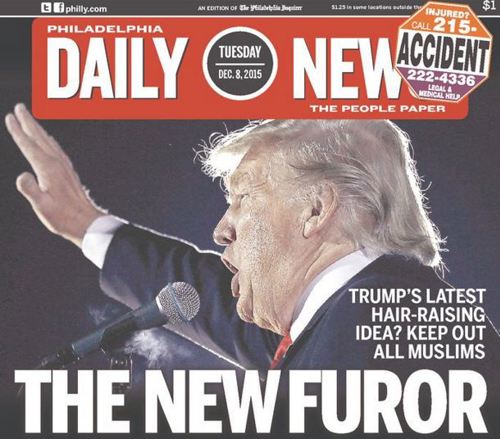 The front page of the Philadelphia Daily News pictured Trump holding his right hand out as if in a Nazi salute with the headline "The New Furor." In morning TV interviews Tuesday on ABC and CNN, Trump was asked about being compared to Hitler.

The candidate didn't back down, saying that banning all Muslims "until our country's representatives can figure out what the hell is going on" is warranted after attacks by Muslim extremists in Paris and last week's shooting in San Bernardino, California, that killed 14.

John Kasich, the Ohio governor running for president, slammed Trump's "outrageous divisiveness," while a more measured Ted Cruz, who has always been cautious about upsetting Trump's supporters, said, "Well, that is not my policy."

Trump's plan also drew criticism from the heads of the Republican Party in Iowa, New Hampshire and South Carolina, the first three states to vote in next year's presidential primaries.

"It is un-Republican. It is unconstitutional. And it is un-American," said Jennifer Horn, chairwoman of the Republican Party of New Hampshire.

In an interview on Fox News, Trump said Muslim members of the U.S. armed forces would "come home" and that his plan would "not apply to people living in the country."

In the late 1800s, Congress passed legislation broadly aimed at halting Chinese immigration. But, said Leti Volpp, a University of California expert on immigration law, "there is no precedent for a religious litmus test for admitting immigrants into the United States."

"Excluding almost a quarter of the world's population from setting foot in the United States based solely upon their religious identity would never pass constitutional muster," Volpp said.