A four-year-old British girl who captured hearts all over the world has died after losing her battle with cancer.

Jessica Whelan's plight came to the public attention when her father Andy Whelan published a distressing black and white image showing the little girl grimacing in pain as she battled her terminal condition.

The four-year-old, from Lancashire, was diagnosed with stage four neuroblastoma in September last year and was no longer receiving treatment.

Strangers raised £76,000 (NZ$133,977) to give the little girl the chance to enjoy the last few weeks that she had to live, but she tragically died at 7am yesterday morning, the Daily Mail reported.

Her father, who has been documenting her struggle online to raise awareness of children's cancer, took to Facebook this morning to announce the devastating news.

He wrote: "I feel both sadness and relief in informing you all that Jessica finally found peace at seven o'clock this morning.

"Now my princess has grown her angel wings and has gone up to play with her friends and loved ones.

"She will now watch down over her little brother and ourselves until one day we are reunited again.

"Last night she finally allowed me to hold her in my arms and we had a big cuddle as I told her how much I loved her.

"I told her again that it was okay for her to close her eyes and go to sleep and I kissed her forehead and her lips numerous times.

"It seems like this is what she needed to finally allow her to find comfort in her passing as within eight hours of this cuddle she finally took her final breath.

"She was a daddy's girl from the start and even right up to the end. 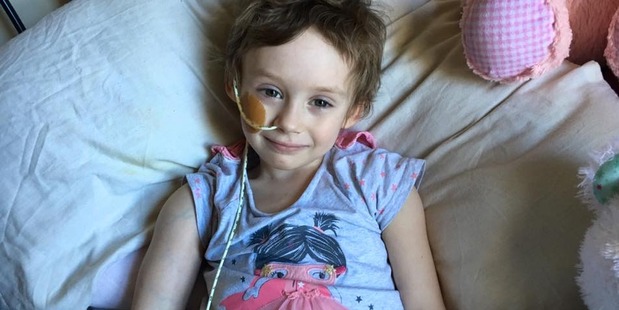 Jessica spent so much time in hospital, she made friends with other children on the ward, and formed strong bonds with the nurses. Photo / Facebook

"I feel like a massive part of me has just been torn away but I am so glad that I could give her that comfort in her final hours.

"She passed peacefully and calmly with not even a murmur.

"Thank you to everyone of you who has shared and has been a part of our journey.

"I ask now for privacy for us and our family as we mourn the loss of our beautiful princess.

"From a heartbroken daddy of the most amazing and beautiful girl."