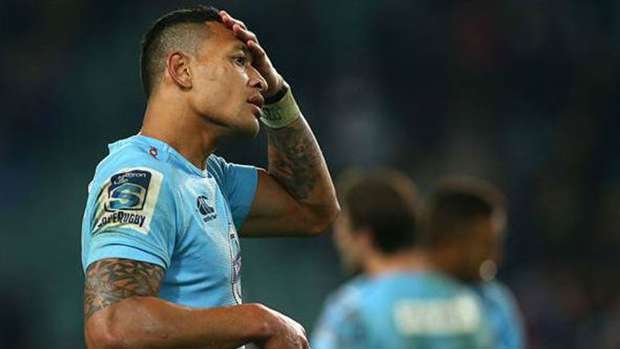 GoFundMe has removed Israel Folau's fundraising page from its website and is issuing refunds to all his donors, saying the campaign breached its terms of service.

"Today we will be closing Israel Folau's campaign and issuing full refunds to all donors. After a routine period of evaluation, we have concluded that this campaign violates our terms of service," said Nicola Britton, GoFundMe's Australia Regional Manager.

"As a company, we are absolutely committed to the fight for equality for LGBTIQ people and fostering an environment of inclusivity. While we welcome GoFundMes engaging in diverse civil debate, we do not tolerate the promotion of discrimination or exclusion.

"In the days since Mr Folau's campaign launched, more than one million dollars have been donated to hundreds of other campaigns, large and small, across Australia. Those acts of kindness are the heart of GoFundMe.

"Our platform exists to help people help others. Australians have shown themselves to be among the most kind and generous people in the world. We look forward to helping more Australians fundraise for causes they care about in the coming months and years."

According to the terms and conditions on the website, users may not attempt to raise money "for the legal defence of … intolerance of any kind relating to race, ethnicity, national origin, religious affiliation, sexual orientation, sex, gender or gender identity, or serious disabilities or diseases".

Israel Folau's GoFundMe page has disappeared - amid reports it's been shut down. pic.twitter.com/4YD6VwUgKu

Folau was widely criticised over the weekend after asking the public to donate $3 million to fund his legal fight against Rugby Australia, which terminated his contract in May over Instagram posts claiming "hell awaits" gay people.

He has launched legal proceedings with the Fair Work Commission, and is seeking up to $10 million in damages.

When news.com.au last viewed Folau's page this morning, Australians had given him more than $760,000. That was before GoFundMe removed it.

"I suppose a big issue is why does he need to raise money from other people? He is pretty well off himself. The core case could earn him $10 million. To use other people's money to earn $10 million," Koch said.

"It could earn $10 million but it could also cost $3 million," Iles countered.

"Firstly, what is the point of the fundraising campaign? Is it for money? It is actually about creating a grassroots support network. It's more about PR for the case, it's more about raising the profile of the case.

"People have been asking me for days before this happened how we could be a part of it. He has offered that. But also I will offer this — how much should it cost him? I mean, it's cost him his job, it's cost him his career. He's banned for life."

"Yeah, it could earn him $10 million," Koch interjected.

"If it does earn him $10 million, that money will be distributed to some cause. He's not going to keep the $3 million that people are giving him. That's going straight into trust, and it can only be distributed for legal expenses, so it's pretty secure," Iles said.

As the pair moved on to a broader discussion about free speech, Iles said he did not believe it was Folau's intention to be inflammatory.

"Didn't he bring it on himself? Why did he need to be so inflammatory? Everyone believes in free speech, there's no doubt about that, but what's the line you draw between free speech and hate speech?" Koch asked.

"He's just expressing his religious beliefs. He believes he has to share the Bible with his fellow man, and that is something that all Christians believe."

"Yeah, but the Bible is a bit weird in parts. The Bible condones slavery," Koch said.

"Well it does. There are parts of it that do condone slavery," Koch continued.

"There are other parts that say men should value their goats and their cows more than their wives. Divorce is adultery. So you should basically, an extension of that, anyone who divorces should go to hell. So, there are some weird things in there that just are not relevant to today's society, and make Christians look bad."

"Well, I won't turn to you for theological advice Kochie," Iles shot back.

"There's a messy amalgamation of things there, but let's put that to one side," Iles said.

"These conversations should be able to be had. We should criticise, we should debate, but what it's cost him is unreasonable. Which is that he has posted scripture, which is part of the mainstream beliefs of millions of Australians, and the politically correct baseball bat has been wielded against him.

"He's lost his job, he's lost his livelihood, he's actually been dragged through the mud in the media quite badly."

"You know, I've met him, and I was struck by that. He doesn't intend any harm to anyone," he said.

"So you're supporting him, basically, on free speech. Not that you agree with him," Koch asked.

"No I stand with Israel in what he has said," the guest responded.

"So you agree that gays and drunks and everyone else will go to hell?" Koch pressed.

"There are an awful lot of us that have politically incorrect beliefs, and the fact that people have bought into Israel Folau's campaign in such massive numbers shows that there are a lot of people out there that are concerned about this," Mr Iles said.

"My organisation fields inquiries every week from people who have been fired or put under disciplinary review or have had their credit damaged because of their faith."

It’s no longer about religion, it’s about YOU and YOUR greed.@IzzyFolau 🤦🏼‍♂️ pic.twitter.com/mdywzaw1ha

It has been a busy 24 hours for Iles, who also defended Folau on Channel 10's The Project last night. Host Lisa Wilkinson asked him to clarify whether he agreed gay people would go to hell just before the interview wrapped up.

He said the "mainstream Christian belief on this is that all of us are born going to hell".

"We're all sinners and I don't think it's helpful to say that Israel Folau's post targeted homosexuals. It didn't," he said.

"I was on the list. I think each of us were on the list. We're all sinners. We will be judged by God and we will be found wanting.

"And that's what Israel was saying, when he was talking about salvation in Jesus Christ available to all, and millions of Australians believe that."

Yesterday, Folau posted an update to his GoFundMe page, thanking those who had donated to his cause.

"Unsurprisingly, I have been criticised by Rugby Australia and some members of the media," Folau said.

"I have received thousands of messages from supporters who believe discrimination in the workplace is wrong and has no place in Australia or anywhere else.

"While the attacks against me have shown I have a big fight on my hands, I will stand strong. Your support and my faith will give me strength."

He told people who were not in a position to donate that he would also value their prayers and messages of support.

"Every little bit will help," he said.

Meanwhile, Father Rod Bower has used the sign outside his church in Gosford to post a new message: "LGTB friends, Folau is wrong, don't listen to him."

At the same time, he did defend Folau's right to voice his opinion.

"I think it's important that he's able to say things, as repugnant as we might find them, because we don't want to drive these things into the dark where they fester and become even more dangerous," Bower said.

"Sunlight's the best disinfectant, so bring them out, let's discuss them, let's debate them."