Police carry a piece of debris from an unidentified aircraft found in the coastal area of Saint-Andre de la Reunion. Photo: Getty Images

A French aviation expert believes he may have found the wreckage of MH370 - the Malaysia Airlines flight which disappeared off the coast of Malaysia in March 2014.

Xavier Tytelman, a former military pilot who now specialises in aviation security, was contacted on Wednesday morning by a man living on the island of Reunion, in the Indian Ocean.

The man sent Mr Tytelman a series of photos showing wreckage of a plane, which the Frenchman said could possibly be the missing jet.

"I've been studying hundreds of photos and speaking to colleagues," Mr Tytelman told The Telegraph. 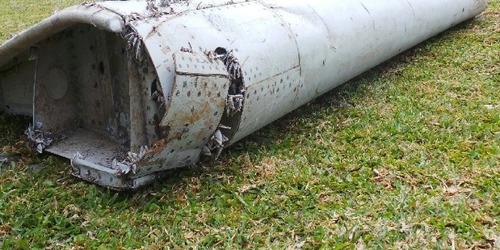 "Police in Reunion examining the wreckage say that it looks like it's been in the water for around a year, which again would fit with MH370. We can't say for certainty, but we do think there is a chance that this is it."

The plane vanished with 239 people on board in circumstances which have baffled investigators, and left distraught families searching for answers.

Wild theories emerged about the plane: that it had landed in Diego Garcia, or flown on to North Korea.

But Mr Tytelman believes that the Indian Ocean location makes sense for wreckage of the plane to have washed up.

"The French police are now looking at it, and the Australians - who are in charge of the search - are interested too," he said. "We don't know how long it will take to get confirmation or a definite denial. But it's an intriguing development."

Writing on his blog, Mr Tytelman said that the photos of the wreckage had aroused significant interest on the AvGeek website - a closed forum for pilots.

He said that there was much discussion over a code part of the wreckage: BB670.

"The code is not that of a plane number plate, nor that or a serial number on machinery," he wrote.

"But if the flaperon does indeed belong to MH370, it's clear that the reference will be swiftly identified. In a few days we will have a definitive answer."