Louise Cairns' baby boy was so keen to enter the world yesterday he arrived in the gutter outside Dunedin Hospital.

Cairns, 21, gave birth to her as yet unnamed 3kg son in Frederick St at 10am yesterday, after her mad dash to the Queen Mary Maternity Unit came up just short.

Yesterday, while still recovering from her ordeal, she told the Otago Daily Times she wanted to thank those who rushed to help.

She had arrived by car already crowning, but the experience began hours earlier.

"My waters broke about 5am, that was fine, I went back to sleep.

"The contractions started about 8am and at 10am we jumped in the car to go to the hospital but he was born before we made it inside.''

She was thankful most passersby happened to be women, many of whom held up blankets to provide privacy.

"One woman came and held my head up and told me I was going to be all right.

"Another woman delivered him.''

Final year medical student Stephanie Lynch, 24, said she was the person to catch the baby. 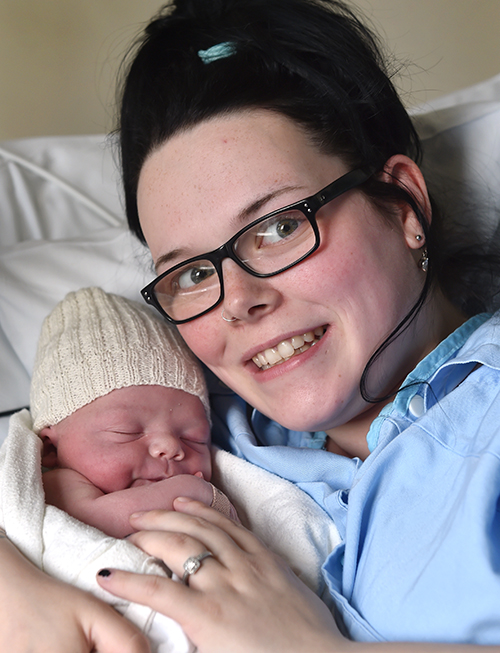 "We heard shrieking coming from outside and we saw Louise lying on the ground.

"I helped catch him.

"It wasn't how I expected to spend my morning.''

Lynch said she gained obstetric experience in Dunedin and Tanzania and was happy to help.

She later visited the new family in the hospital.

Cairns' partner was also there, however, he felt sick and his legs were wobbling at the sight, she laughed.

"They were all awesome.

"I didn't care that people could see because I couldn't stop.

"I don't know what I would have done if they weren't here.''

Staff from the maternity unit also arrived shortly after she began pushing in the gutter.

Nurses on the ward were hoping Cairns would name her son Frederick after the street he was born on, however, she had ruled out the old-fashioned name.

Speedy would also not make the cut for his middle name, she joked.

Cairns was particularly shocked by the fast delivery because she had been induced to give birth to her eldest son.

The new family wanted to thank "everyone'' for helping with the sudden birth.

Cairns intended to send out chocolates to those who helped.

It was hoped they would go home today.