At least four people are dead after a terror attacker brought carnage to central London today, mowing down pedestrians on Westminster Bridge before attacking police with a knife in the grounds of the Houses of Parliament.

The four who died include a policeman and the attacker.

More than 12 people are said to have been hit by a vehicle on the bridge after a 4x4 drove into pedestrians and cyclists before crashing into the gates of Parliament then running through the gates and stabbing the officer. The attacker was shot.

Witnesses reported at least two bodies on the ground on Westminster Bridge and "one in the water". St Thomas' Hospital confirmed one woman has died and a number of others have been hurt - including some with "catastrophic" injuries. 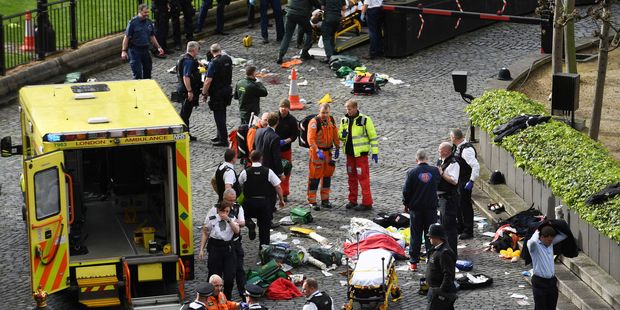 Emergency services at the scene outside the Palace of Westminster. Photo / AP Armed police officers gather outside of the Houses of Parliament. Photo / AP

The attacker was reportedly shot by police as he approached a second officer clutching his knife.

Paramedics tended to his victims on the bridge and at the gate.

Prime Minister Theresa May was seen being ushered into a silver Jaguar in the grounds of the palace as what sounded like gunfire rang out about 2.45pm.

Sirens were heard rushing towards the scene from nearby Victoria Station.

She also said she treated a police officer in his 30s with a head injury who had been taken to King's College Hospital.

She said: "I confirmed one fatality. A woman. She was under the wheel of a bus. She died, confirmed her death at the scene."

Anderson said: "There were people across the bridge. There were some with minor injuries, some catastrophic.

"Some had injuries they could walk away from or who have life-changing injuries. There were maybe a dozen [injured]."

Two people were seen lying within Old Palace Yard, immediately outside Westminster Hall and were believed to be the attacker and the stabbed police officer. The sitting in the House of Commons was suspended while police officers sealed off the area.

Immediately before the attack, a crowd of people was seen running from the direction of Westminster Bridge and around the corner into Parliament Square.

Witness Rick Longley told the Press Association that he saw a man stab the policeman outside Britain's Parliament.

A woman was pulled alive from the River Thames and is being treated by paramedics on a nearby pier. It's thought she was on bridge at time

"We were just walking up to the station and there was a loud bang and a guy, someone, crashed a car and took some pedestrians out," he said.

"They were just laying there and then the whole crowd just surged around the corner by the gates just opposite Big Ben.

"A guy came past my right shoulder with a big knife and just started plunging it into the policeman."

"A bus stopped in front of me and everybody started screaming" - #Westminster Bridge eyewitness describes what he saw pic.twitter.com/k6n2kHDq4S In this image taken from video police officers gather around a car adjacent to Houses of Parliament in London. Photo / AP

Daily Mail political editor Jason Groves said he witnessed the scene from his office window and described the moment the assailant was shot.

"A guy comes through the vehicle entrance wielding something, towards a copper, the copper tumbles," he said.

"The man's running towards Westminster Hall, and then a plainclothes copper comes running out.

"Not from the gate, but from the inside, shoots him once from maybe 10 or 15 yards away with a handgun, and then gets closer to him and shoots him again from over him and he doesn't get up."

Commons Leader David Lidington told MPs a "police officer has been stabbed" and the "alleged assailant was shot by armed police" following a "serious" incident within the parliamentary estate.

Press Association reporter Laura Harding, who was in Westminster at the time of the attack, said: "Everyone has been evacuated into Central Lobby, including a group of schoolchildren and kitchen staff.

"Around 15 schoolchildren aged around 10, with armed police coming through the lobby now.

"The children are really calm, the teachers are comforting them."