A former top South African police commander involved with All Blacks security at the 1995 Rugby World Cup says the team was deliberately poisoned before the final against the Springboks.

Rory Steyn - chief bodyguard to President Nelson Mandela - believes betting syndicates were behind the poisoning. The All Blacks lost the Johannesburg final 15-12. 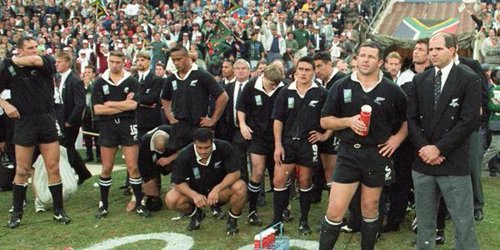 Mr Steyn said there was a huge degree of paranoia within the All Blacks camp, which escalated after the semifinal win over England in Cape Town. The team travelled back to Johannesburg and it was decided among management that they would eat separately to the rest of their hotel's guests in the week leading up to the final.

"I said that makes it easier to target them, I didn't think it was a good idea," Mr Steyn said.

"On the Thursday [June 22] before the final, which was on Saturday [June 24], they were poisoned. About two-thirds of the squad got very sick, properly sick," he said.

"I believe it was the water that was got at, because the food that was served at lunch time ... was chicken burgers and hamburgers."

He said an investigation by a private detective hired by then All Blacks coach Laurie Mains turned up very little.

Mr Steyn said he didn't think anyone involved with South African rugby played a part in the poisoning. Mains blamed a waitress called "Suzie" but Mr Steyn believed money and betting syndicates were behind the plot.

"The odds were on the All Blacks."

Mr Steyn is in New Zealand to talk about his time as Nelson Mandela's chief bodyguard.

An experienced police officer, he first met Mr Mandela on the day of his inauguration as South Africa's president in May 1994. At the time, Mr Steyn said, he thought the new leader was a terrorist.

But on that day the President did something that began to dismantle Mr Steyn's 30 years of conditioning under the apartheid system - sharing an exchange with an "old school" police colonel, bringing the man to tears with his rhetoric of oneness in a country that had been plagued by racism for almost four decades.

"Part of the training I'd undergone was with the special [police] branch which would involve political crime ... So I was of the opinion that [Mandela] should have been hanged way back in 1964 as a terrorist," Mr Steyn said.

"I thought that he and his party wanted to establish a communist state in South Africa and sweep all decent people into the sea - so that was pretty much the mindset I was in."

When Mr Mandela arrived at the park for a meet-and-greet, he'd been President for less than an hour, Mr Steyn said.

When it was time for him to leave again, he took a detour - walking straight across a reception hall towards an elderly police colonel.

Mr Mandela stopped in front of the colonel and put out his hand.

"It was the most extraordinary exchange. I didn't expect to hear anything like that," Mr Steyn said.