Financial wunderkind Jamie Beaton has raised $41 million from New York investors, putting the 21-year-old from St Heliers firmly on to the rich list and valuing his Crimson Consulting at $220m.

The recent share issue values Beaton's one-third stake in the company at $73m. The National Business Review's annual Rich List purports to rank all New Zealanders with a net worth of $50m or more.

Beaton, speaking from Singapore, said the funding would allow further expansion into Bangkok and Mumbai, and would see a ramping up of their online offerings.

"A big portion of this round is dramatically building out our engineering team across NZ and also the US.

It's going to take up our headcount significantly, and we'll be one of the largest technology companies locally," he said.

Beaton said he hoped Crimson would be employing "around 75" software engineers and developers by year's end.

He said the company had raised $41m in additional funding, but did not disclose further financial information, nor the identity of investors.

Companies Office filings suggest the issue saw 18.75 per cent of Crimson sold to new investors in the raising, largely taken up by New York-based Tiger Management.

The size of the issue suggests a post-money valuation for Crimson of $220m. If listed, the three-year-old company founded by teenagers would be on the fringe of inclusion in the NZX50 index.

Two new shareholding companies - Internet Fund IV and JanaJena, who now own 10 per cent of Crimson - are listed as sharing the same Singapore address as Tiger Global.

Tiger founder and billionaire Julian Robertson, who has strong ties to New Zealand through philanthropy and tourism property investments, also increased his stake to 18.7 per cent. 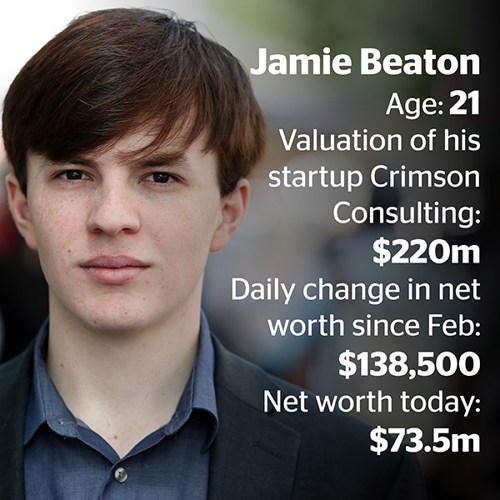 Beaton's mother, Auckland businesswoman Paula Beaton, said she was very proud of her son - even if his ability to keep on top of his laundry had not improved alongside his net worth.

"Heavens no, if anything there's been a wanton deterioration. He's a very good manager of time, and he's needed to be with the level of due diligence his investors have undertaken. But I can say that this field of endeavour has suffered as a consequence," she said.

The capital raising has also proved a jackpot for other New Zealand investors. Seed investment from Auckland University's Ice Angel investor programme is now worth $13.3m.

Crimson co-founder 22-year-old Sharndre Kushor has a 9.7 per cent stake in the company, now valued at $21.2m.

In a statement, Kushor said Crimson had this year held a range of sales events in southeast Asia and South America, promoting their remote mentoring service.

"Students will often have a team of five -10 tutors and mentors from around the world working with them," she said.

Crimson said they employed 2000 consultants and this year their New Zealand clients had won $12m in financial aid and scholarships after gaining admission to offshore universities.