Few mysteries have inspired such heated debate as the disappearance of Malaysian airliner MH370, its 12 crew and 227 passengers.

Searchers have scoured huge swathes of the world's oceans for the jet, and now hopes are raised debris may have washed up on the island of Réunion. 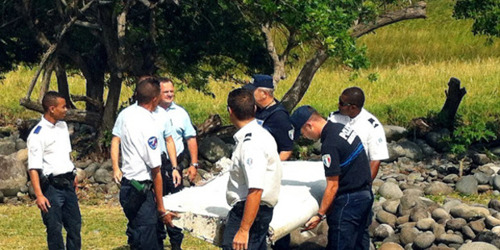 Here are some of the leading theories on what happened since the jet disappeared from radar on March 8, 2014 after apparently changing course three times.

Did the pilot hijack his own plane?

Pilot Zaharie Ahmad Shah planned mass murder because of personal problems, locking his co-pilot out of the cockpit, closing down all communications, depressurising the main cabin and then disabling the aircraft so that it continued flying on auto-pilot until it ran out of fuel.

That was the popular theory in the weeks after the plane's disappearance.

His personal problems, rumours in Kuala Lumpur said, included a split with his wife Fizah Khan, and his fury that a relative, opposition leader Anwar Ibrahim, had been given a five-year jail sentence for sodomy shortly before he boarded the plane for the flight to Beijing.

But the pilot's wife angrily denied any personal problems and other family members and his friends said he was a devoted family man and loved his job.

This theory is also the conclusion of the first independent study into the disaster by the New Zealand-based air accident investigator, Ewan Wilson.

Wilson, the founder of Kiwi Airlines and a commercial pilot himself, arrived at the shocking conclusion after considering "every conceivable alternative scenario".

However, he has not been able to provide any conclusive evidence to support his theory.

The claims are made in the book Goodnight Malaysian 370, which Wilson co-wrote with the New Zealand broadsheet journalist, Geoff Taylor.

It's also been rumoured that Zaharie used a flight simulator at his home to plot a path to a remote island.

However, officials in Kuala Lumpur declared that Malysian police and the FBI's technical experts had found nothing to suggest he was planning to hijack the flight after closely examining his flight simulator.

If not the pilot, was the co-pilot responsible?

Co-pilot Fariq Abdul Hamid, 27, again for personal problems, was suspected by rumour-spreaders to have overpowered the pilot and disabled the aircraft, flying it to its doom with crew and passengers unable to get through the locked cockpit door.

Theorists have put forward the suggestion that he was having relationship problems and this was his dramatic way of committing suicide.

But he was engaged to be married to Captain Nadira Ramli, 26, a fellow pilot from another airline, and loved his job. There are no known reasons for him to have taken any fatal action.

Others have suggested that because he was known to have occasionally invited young women into the cockpit during a flight, he had done so this time and something had gone wrong.

Young Jonti Roos said in March that she spent an entire flight in 2011 in the cockpit being entertained by Hamid, who was smoking.
Interest in the co-pilot was renewed when it was revealed he was the last person to communicate from the cockpit after the communication system was cut off.

Did the Russians steal MH370 and fly the jet to Kazakhstan?

An expert has claimed the missing Malaysia Airlines flight 370 was hijacked on the orders of Vladimir Putin and secretly landed in Kazakhstan.

Jeff Wise, a US science writer who spearheaded CNN's coverage of the Boeing 777-200E, has based his outlandish theory on pings that the plane gave off for seven hours after it went missing, that were recorded by British telecommunications company Inmarsat.

Wise believes that hijackers "spoofed" the plane's navigation data to make it seem like it went in another direction, but flew it to the Baikonur Cosmodrome, which is leased from Kazakhstan by Russia.
However, Wise admits in New York Magazine that he does not know why Vladimir Putin would want to steal a plane full of people and that his idea is somewhat "crazy".

Wise also noted there were three Russian men onboard the flight, two of them Ukrainian passport holders.

Aviation disaster experts analysed satellite data and discovered - like the data recorded by Inmarsat - that the plane flew on for hours after losing contact.

Careful examination of the evidence has revealed that MH370 made three turns after the last radio call, first a turn to the left, then two more, taking the plane west, then south towards Antarctica.

This extraordinary claim came from 41-year-old British yachtsman Katherine Tee, from Liverpool, whose initial account of seeing what she thought was a burning plane in the night sky made headlines around the world.

On arrival in Thailand's Phuket after sailing across the Indian Ocean from Cochin, southern India with her husband, she said: "I could see the outline of the plane - it looked longer than planes usually do.There was what appeared to be black smoke streaming from behind."

Ms Tee's general description of the time and place was vague and she lost all credibility when she later stated on her blog that she believed MH370 was a kamikaze plane that was aimed at a flotilla of Chinese ships and it was shot down before it could smash into the vessels.

Without solid proof of the satellite data, she wrote on her blog, Saucy Sailoress, the plane she saw was flying at low altitude towards the military convoy she and her husband had seen on recent nights. She added that internet research showed a Chinese flotilla was in the area at the time.

On a flight from Jeddah to Kuala Lumpur that crossed over the Andaman Sea on March 8, Malaysian woman Raja Dalelah, 53, saw what she believed was a plane sitting on the water's surface.

She didn't know about the search that had been started for MH370. She alerted a stewardess who told her to go back to sleep.

"I was shocked to see what looked like the tail and wing of an aircraft on the water," she said.

It was only when she told her friends on landing in Kuala Lumpur what she had seen that she learned of the missing jet. She had seen the object at about 2.30pm Malaysian time.

She said she had been able to identify several ships and islands before noticing the silver object that she said was a plane.

But her story was laughed off by pilots who said it would have been impossible to have seen part of an aircraft in the water from 35,000ft.

Ms Raja filed an official report with police the same day and has kept to her story.

A catastrophic event such as a fire disabling much of the equipment resulted in the pilots turning the plane back towards the Malaysian peninsula in the hope of landing at the nearest airport.

Satellite data, believable or not, suggests the aircraft did make a turn and theorists say there would be no reason for the pilots to change course unless confronted with an emergency.

A fire in a similar Boeing 777 jet parked at Cairo airport in 2011 was found to have been caused by a problem with the first officer's oxygen mask supply tubing.

Stewarts Law, which has litigated in a series of recent air disasters, believes the plane crashed after a fire - similar to the blaze on the Cairo airport runway - broke out in the cockpit.
After an investigation into the Cairo blaze, Egypt's Aircraft
Accident Investigation Central Directorate (EAAICD) released their final report which revealed that the fire originated near the first officer's oxygen mask supply tubing.

The cause of the fire could not be conclusively determined, but investigators pinpointed a problem with the cockpit hose used to provide oxygen for the crew in the event of decompression.

Following the 2011 fire, US aircraft owners were instructed to replace the system - it was estimated to cost $2,596 (£1,573) per aircraft. It was not known whether Malaysia Airlines had carried out the change.

If either pilot wanted to crash the plane, why turn it around? So the turn-around suggests they were trying to land as soon as possible because of an emergency.

The Boeing 777 was shot down by the Americans who feared the aircraft had been hijacked and was about to be used to attack the U.S. military base on Diego Garcia atoll in the Indian Ocean. So conspiracy theorists claim.

And former French airline director Marc Dugain said he had been warned by British intelligence that he was taking risks by investigating this angle.

There is no way of checking whether Dugain received such a warning or why he believes the Americans shot down the plane.

But adding to the theory that the aircraft was flown to Diego Garcia, either by the pilot Zaharie or a hijacker, was the claim that on the pilot's home flight simulator was a "practice" flight to the island.

Professor Glees said: "The Americans would have no interest in doing anything of the kind and not telling the world.

"In theory, they might wish to shoot down a plane they thought was attacking them but they wouldn't just fire missiles, they'd investigate it first with fighters and would quickly realise that even if it had to be shot down, the world would need to know."

Mr Rosenschein said: "The US would not have been able to hide this fact and in any event, if it were true, they would have admitted their action as it would have prevented a successful terrorist action on this occasion and acted as a deterrent for future terrorist attacks."