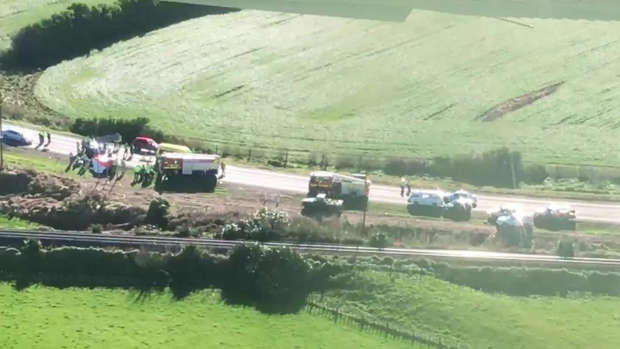 A seventh person has died overnight after the horror crash in Waverley.

The 8-year-old girl who was critically injured in yesterday's crash on State Highway 3 died in Waikato Hospital early this morning, police said.

The girl's mother was in a stable condition in Wellington Hospital's intensive care unit this morning, a spokeswoman said.

The crash, which also killed a newborn baby, happened on a crisp and sunny winter's day in South Taranaki when conditions on the road were good.

Emergency services were called to the horror two-car crash just after 11am yesterday.

Police initially reported five people had been killed in the crash, but later confirmed that a sixth person, believed to be the baby, had also died.

A male driver of the southbound car died at the scene, while a woman and the 8-year-old girl from the same vehicle, were flown to Wellington and Waikato hospitals.

Yesterday morning, Taranaki police had issued warnings to drivers after four crashes caused by ice on roads. Police are still investigating the cause of this crash.

The Waverley crash is the worst on New Zealand roads in 13 years.

The worst fatal crash in New Zealand's history was recorded in 1963, when 15 people were killed in a bus crash in Northland.

Ten crashes have killed six people since 1972, including yesterday's tragedy. 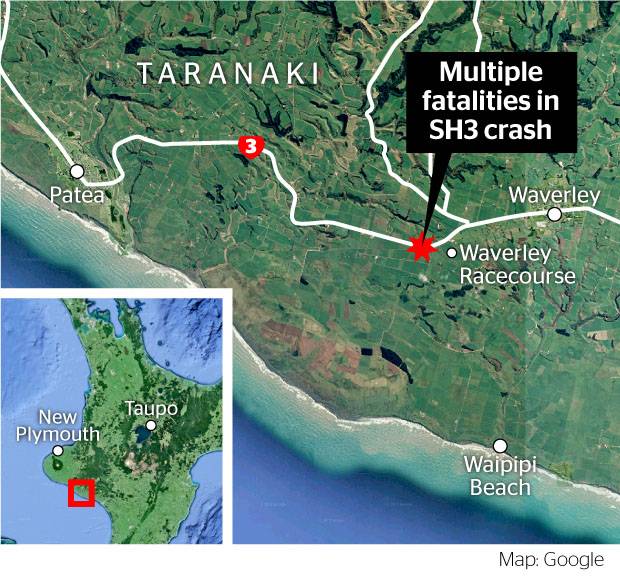 At the scene yesterday afternoon two vehicles could be seen on the road still - one of them covered with large pieces of tarpaulin.

The other car's windows had blown out and the front was crumpled.

Acknowledging the fine day around him, he said: "That this happened on a day like today is just unbelievable and just devastating for all those involved."

He said emergency crews from St John, Fire and Emergency and police would be offered support, given what they had seen.

"Dealing with a crash like this today, with six people dead, is just devastating. There are no other words for it, really.

"A lot of our staff have young families and having to deal with that is not pleasant. But our thoughts are with their families first - they're the ones who have actually lost the baby.''

White also paid tribute to those who were first at the scene, including members of the public who did what they could to help and alerted authorities.

"I really want to thank those who were first at the scene for their prompt action - coming across what must've been an absolutely horrible scene."

A local woman told the Whanganui Chronicle she had left work about 500m from the crash and described the scene as "a mess''.

She said it appeared a vehicle had crossed the centre line and collided head-on with the second car.

The woman said the road was wet and slippery.

A staff member at the Waverley Four Square also described the road as wet and slippery, after a big frost yesterday morning.

However, authorities later said conditions on the road were fine and dry.

The circumstances of the crash are now being investigated by the police serious crash unit.

Although officers were still working to determine various factors - including whether speed was one - what was clear was that the vehicles had collided head-on.

Authorities said earlier it appeared one of the vehicles had crossed the centre-line on a slight bend in the road.

Police said they were working to contact the victims' next of kin.

SH3 was closed for several hours after the crash and traffic was diverted. The road was reopened about 6pm.

Yesterday's crash brings the number of people who have died on New Zealand roads this year to 193, up from 184 at the same point last year.

A truck driver was killed near Waverley on Monday.