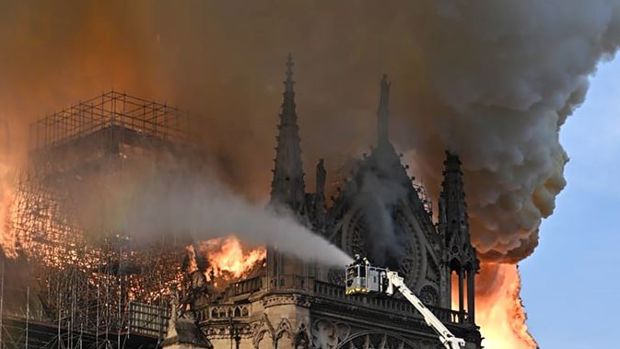 KEY POINTS
* The 850-year-old famous cathedral has been virtually destroyed in a massive blaze
* The fire may have been sparked by renovation works
* French President Emmanuel Macron: "I am sad tonight to see this part of us burning."
* 12 million people visit Notre Dame each year - it also houses famous artworks
* "This is so much history going up in flames"

The soaring spire of Notre Dame Cathedral in Paris has collapsed in flames, and a church spokesman says the entire wooden interior of the 12th-century landmark is burning and likely to be destroyed.

A massive fire engulfed the roof of the cathedral in the heart of the French capital on Monday afternoon as Parisians watched in horror.

Here’s the video of Notre Dame cathedral’s spire collapsing amidst the flames.pic.twitter.com/uR2LWrIFGJ

Notre Dame spokesman Andre Finot told French media: "Everything is burning, nothing will remain from the frame."

The cathedral is home to incalculable works of art and is one of the world's most famous tourist attractions.

The cause of the blaze isn't yet known, but scaffolding could be seen on the roof of the burning structure. The spire was undergoing renovation.

Pictures posted on social media showed enormous plumes of smoke billowing into the city's skyline as firefighters rushed to the historic site.

One of the cathedral's spires was smothered in flames.

A spokesperson for the cathedral said the blaze was first reported at 4.50am (NZT) (5.50pm GMT) and the building was evacuated soon after.

Watching a live Periscope of Notre Dame Cathedral in Paris burning down :( https://t.co/MPiXdSDfBW

Macron reached the landmark cathedral on Monday evening and went straight into meetings at the nearby Paris police headquarters.

France's civil security agency says "all means" except for water-dropping aircraft were deployed to tackle the blaze.

The defence agency said those were unsuitable for fires like the one at Notre Dame because dumping water on the building could cause the whole structure to collapse.

According to French newspaper Le Monde, the fire broke out in the attic of the historic monument before spreading to engulf a large section of the roof.

An AP reporter at the scene of Monday's fire says the roof at the back of the cathedral, behind the nave, is in flames and yellow-brown smoke and ash fill the sky.

The intensity of the flames coming out of Notre Dame Cathedral in Paris... pic.twitter.com/JDAMCXFMk4

Hidalgo urged residents of the French capital to stay away from the security perimeter around the Gothic-style church. The mayor says city officials are in touch with Roman Catholic diocese in Paris.

The cathedral is one of the finest examples of French Gothic architecture in Europe, and one of the most visited buildings in the world.

Notre Dame - which means 'Our Lady' - was built in 1160 and completed by 1260, and has been modified on a number of occasions throughout the century.

Notre Dame, Paris, is on fire and it feels like the end of the world. pic.twitter.com/qYYk7ewipq

It is the cathedral of the Archdiocese of Paris and is visited by some 12 million people every year.

It's also famous in literature - the centre point of Victor Hugo's novel, The Hunchback of Notre Dame.

Huge crowds can be seen gathering as thick smoke rises from the landmark in France's capital.