A blast at a concert in the northern England city of Manchester where US singer Ariana Grande was performing has killed at least 19 people and injured about 50. British police are treating it as a terrorist attack.

Police responded to reports of an explosion on Monday night confirming there were a number of fatalities and others injured in the Manchester Arena, which has a capacity for 21,000 people.

Bloodied concertgoers were pictured being helped by emergency services outside the gig and armed police were seen patrolling the arena.

Video footage showed people fleeing in tears from the venue after reports of explosions at the end of the concert, according to the Daily Mail.

Evie Brewster, who attended the concert, told MailOnline: "Ariana Grande had just finished her last song and left the stage when a huge explosion sounded.

"Suddenly everybody started screaming and running for the exit.

"We could hear the police and ambulance sirens. It was terrifying.

"There were thousands of people trying to get out at once. They were all screaming and crying. The whole place smelled smokey and burned.

"The explosion sounded like it was inside the building somewhere." Manchester's Victoria station, which backs onto the arena, has been evacuated and all trains cancelled.

"There are a number of confirmed fatalities and others injured.

"Please avoid the area as first responders work tirelessly at the scene. Details of a casualty bureau will follow as soon as available."

Jonathan Yates, 24, from the Wirral, who attended the gig, told MailOnline: "The concert had finished and the lights came on almost instantly. There was a bang, a weird bang. There were lots of balloons but I thought to myself 'that can't be a balloon, that's not normal'.

"I heard five or six bangs that sounded like gunshots. When we got outside people were crying and on their phones.

"You don't think it's something that's going to happen when you go. It was such a nice, fun concert." 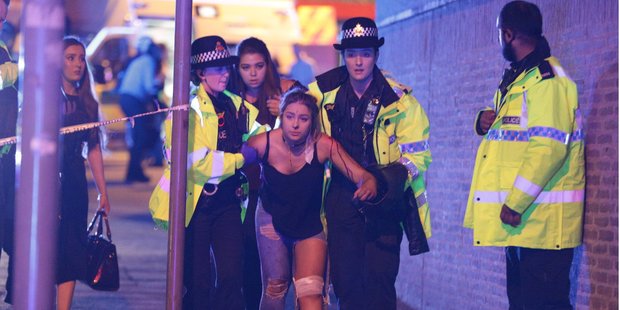 A woman is helped by police following reports of an explosion at an Ariana Grande concert at Manchester Arena. Photo / Joel Goodman/LNP/REX/Shutterstock

Nick Schurok, 28, from Manchester, told MailOnline: "Ariana Grande had just finished the concert and the lights came on. Everyone started leaving. I was on the floor and at the back of the arena people started exiting through the tunnels.

"There was a bang in the left tunnel and everyone went to the middle tunnel. Then about two minutes later, there was another bang. The bang was so loud and crowds of people were running. There were lots of children and families there."

Another witness Jenny Brewster told MailOnline: "We were exiting the building when it happened. We'd headed towards the main doors as Ariana was performing the last song because we wanted to beat the crowds, but as we made our way there a wall of security men blocked it and told us to go the other way.

"Seconds later they shouted 'run!' and the explosion happened right behind them. Hundreds of people were running and screaming. Those men saved our lives."

Catherine Macfarlane told Reuters: "We were making our way out and when we were right by the door there was a massive explosion and everybody was screaming.

"It was a huge explosion; you could feel it in your chest. It was chaotic. Everybody was running and screaming and just trying to get out of the area."

Majid Khan, 22, said: "I and my sister, along with a lot of others were seeing Ariana Grande perform at Manchester Arena, and we were all exiting the venue when around 10.40-10.45pm-ish a huge bomb-like bang went off that hugely panicked everyone and we were all trying to flee the arena.

"It was one bang and essentially everyone from the other side of the arena where the bang was heard suddenly came running towards us. They were trying to exit Trinity Way and that was blocked so everyone was just running to any exit they could find as quickly as they could.

"Everyone was in a huge state of panic, calling each other as some had gone to the toilet while this had gone off, so it was just extremely disturbing for everyone there."

Another concert-goer Laura, 22, told MailOnline: "There was a woman leaning against a car in the car park with her head down, covered in blood and a little girl being lifted away by paramedics. There were quite a few people injured in the car park."

Her friend, Livvy, 22, added: "We saw the explosion happen. Bits of it hit me. My first thought was, 'that's a bomb'.

"It was just when we were leaving. We saw a flash of light and smoke.

"We're really shaken up. If we had been there moment earlier we would have been caught up in it rather than seeing it."

Oliver Jones, 17, was at the concert with his 19-year-old sister.

He said: "I was in the toilet and heard a loud bang just after the concert had finished and people had started to leave.

"The bang echoed around the foyer of the arena and people started to run.

"I seen people running and screaming towards one direction and then many were turning around to run back the other way.

"Security was running out as well as the fans and concert goers.

"Reports of blood and people injured."

He added: "In so much shock and panic. You see this on the news all the time and never expect it to happen to you. I just had to run and make sure me and my sister were safe."

Suzy Mitchell, 26, whose flat is opposite the area, reported a huge bang rocking the neighbourhood.

She told the Press Association: "[I] just heard a huge bang from my bed, came out to the front of my apartments (we're on the top floor so have perfect view) and everyone was running away in big crowds.

"The bang was so big I heard it from my room, which is at the back of the apartment blocks.

"Lots of emergency services going to and from. But can't see anything substantial as of yet except fleeing people and lots of cars.