Prince Harry has officially landed in the capital. A Royal New Zealand Airforce 757 plane, with the popular royal on board, has just landed at Wellington Airport.

The popular royal was greeted by New Zealand officials as he disembarked from the front stairs of the plane wearing a dapper navy suit and his trademark cheeky grin.

He was greeted with a handshake by Prime Minister John Key, his wife Bronagh, and Wellington mayor Celia Wade-Brown.

As he left the tarmac and walked towards the terminal, he waved to a small gathering of adoring fans. 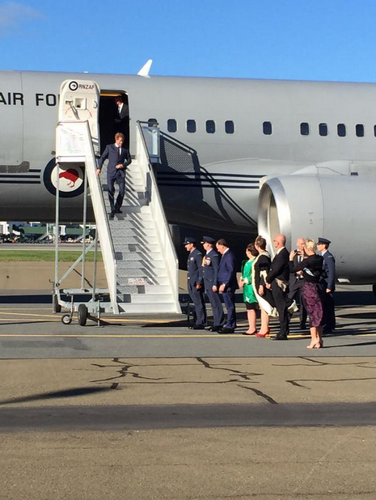 His next stops will be an official welcome at Government House in Newtown, then a wreath-laying ceremony at the new Pukeahu National War Memorial, then he'll attend the Hurricanes v Sharks Super Rugby game tonight at Westpac Stadium.

He's here for a week long tour of the country.

You can see his full schedule HERE to track his every move around the country including Wellington, Stewart Island, Christchurch, Whanganui, Auckland and more.

If you spot Prince Harry around NZ, then send us a photo and you can WIN tickets to Ed Sheeran at Auckland's Mt Smart Stadium!! We're calling it 'Harry Spotter'!