Aussie airline Qantas have made good on a bet wagered with Air New Zealand and staff are today donning the revered All Blacks jersey.

Staff - including two pilots - on a flight from Sydney to Auckland this afternoon are all wearing sporting All Blacks gear following the Wallabies loss yesterday.

The Australian national carrier this afternoon released photos of its staff receiving replica jerseys courtesy of Air New Zealand ahead of their flight out of Sydney this morning. The two pilots on board today could have easily passed as assistant coaches in their All Black finery.

"We still love the Qantas Wallabies, but a bet is a bet. Today we followed through with the #AirlineWager and accepted jerseys from Air New Zealand."

Qantas had earlier agreed to agreed to an airline wager with Airline New Zealand. 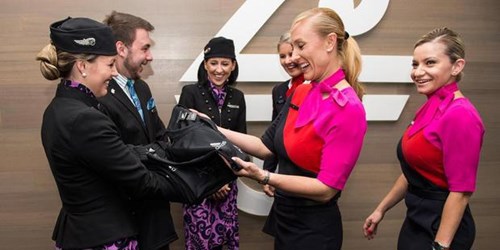 Both national carriers enjoyed some easy banter on social media sites last week, with each suggesting that the other airline change its colours to that of the winning team.

And it seems the All Blacks edge made a difference on today's special flight. Sydney to Auckland's QF143 was scheduled to touch down at 3.10pm. It landed 10 minutes earlier.