The Northland forest in which a helicopter crashed yesterday, killing two people, is so dense no wreckage was visible even from the air.

Emergency services could use only four-wheel-drive vehicles or walk to access from a forestry road in the Glenbervie Forest where a Robinson R44 chopper crashed just after 2pm.

About 300 Robinson choppers are registered in New Zealand and the brand makes up 40 per cent of the nation's helicopter fleet. 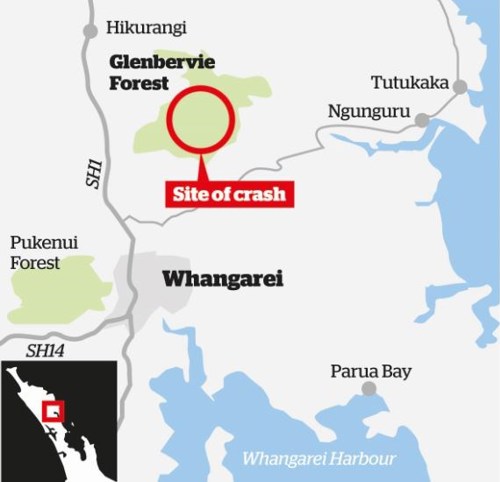 The forest is owned by Rayonier and the crash victims were believed to have been contractors surveying the forest who were well-known in the forestry industry.

Rayonier told 1 News staff at the company were "offering support" to the victims' families.

Yesterday afternoon emergency crews trekked through tracks fringed by pine and native trees on foot because the crash site was inaccessible by vehicles.

Northland Electricity Rescue Helicopter winched a paramedic to the scene before land crews arrived. But by the time the paramedic touched down the victims were already dead.

When rescuers arrived, they found the bodies amongst the wreckage. 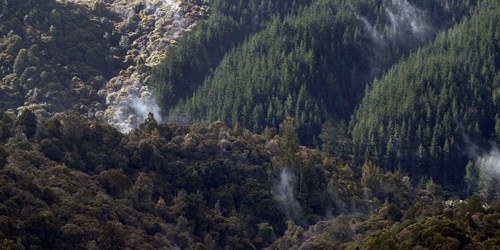 The crash comes only days after the Transport Accident Investigation Commission (TAIC) added Robinson Helicopters to its watchlist of safety concerns.

In a statement released Thursday TAIC said along with the Civil Aviation Authority (CAA), it had investigated 14 cases since 1996 where the inner part of a main rotor blade or rotor hub of Robinson choppers had bumped the main rotor drive shaft or "mast".

It said the accidents had claimed 18 lives.

Peter Northcote, spokesman for TAIC, said it would monitor the CAA's inquiry into yesterday's crash, before deciding whether or not to launch its own investigation.

Police said they were investigating what the chopper was doing before it crashed and were yet to establish what had caused the accident. A post mortem would be conducted today and the wreckage remained at the crash site overnight.

After TAIC raised concerns about Robinson helicopters on Thursday, the mother of a previous crash victim spoke out about her loss.

Louisa Patterson, who lost her 18-year-old son James Patterson-Gardner in a R44 crash last year alongside Wanaka pilot Steve Combe, 42, said she did not want any other family to "pay the ultimate price" of losing a loved one in such horrific circumstances.

"Nothing will bring back Steve and James nor the other victims of the many inflight breakups of this aircraft type," she said.

"Other Robinson accidents have been blamed on turbulence or pilot inexperience. In our case, the instructor was experienced and from the tracking data, the aircraft was being flown in the cruise, in calm weather and at a safe altitude.

"We firmly believe that had Steve and James been in any other aircraft type the accident would not have occurred."

Out of respect for the victims' families Patterson declined to comment on yesterday's crash, except to say she offered her "full condolences" to the loved ones of those killed.

Attempts by the Herald to contact US-based Robinson for comment were unsuccessful because of the time difference.

However, in August this year the company attributed the cause of crash that killed Patterson-Gardner to pilot error.