* The SkyCity fire continues to burn this morning - with severe gales and rain forecast
* Roads in the CBD are closed, buses have been diverted - some workers are staying home
* A Civil Defence public health alert has been issued for people living and working in the CBD
* One person was injured and at least one firefighter has been hospitalised - believed to have been a medical event
* A worker's blowtorch is believed to have ignited the fire about 1.15pm on Tuesday
* Watch: From the sky - footage of the giant fire

A massive SkyCity inferno continues to rage this morning, with ground-based firefighters using high-powered hoses to try to quell flames.

The neighbouring TVNZ building is being evacuated amid fears the fire may spread, and the Breakfast show is broadcasting live from the street outside. Auckland Council's head office in Albert St is being assessed for smoke damage and health and safety for staff and could also be closed.

The fire - ignited by a worker's blowtorch on the roof of the seven-storey building about 1.15pm yesterday - shows little sign of abating this morning. Flames and thick smoke continue to pour from the building.

"It's now got to the point where the regional commander has told me that they've abandoned the roof, they think that the roof might collapse so what they might try to do is stop the fire reaching below level five," Mayor Phil Goff told RNZ last night.

More than 80 firefighters are at the scene, with fire engines lined up Nelson St, as Auckland commuters face a morning of chaos and confusion. Many central city roads are closed, bus services are disrupted - and some businesses are urging workers to stay away today.

Firefighters face a battle on another front this morning, with a severe weather warning forecast for Auckland - including heavy showers, thunder, hail and gales gusting 100km/h set to strike. Meanwhile, Auckland commuters are already caught up in a long, slow crawl to work this morning, with central city roads closed as firefighters battle the SkyCity inferno.

Much of Nelson St is closed - creating havoc for traffic entering the city from the busy northwestern motorway. Traffic maps show dozens of pinchpoints around the city at 8am.

More than 20 fire engines were lined up along Nelson St with ground-based firefighters using high-powered hoses to try to quell flames.

Flames pouring out of the convention centre ceiling pic.twitter.com/ySvDEqQCG0

Jeepers. This is awful. pic.twitter.com/KEQnBwk57D

Firefighters have come off the roof. A sudden flare up that's burning quite strong at the moment. pic.twitter.com/BCt0GJaf7O

Spokesman Mark Hannan said the immediate roads around SkyCity - including Hobson, Victoria, Nelson and Wellesley Sts - would remain closed until at least mid-morning.

"It will be a slow journey in [on Wednesday]. If you can avoid coming into the city, do."

People who could work from home or from a non-central location this morning, or start work later in the day, were recommended to do so.

"There will be ongoing disruption [Wednesday] morning, while roads remain closed and public transport is diverted.

"We urge people to use their common sense and not put themselves in harm's way by standing in smoke plumes or downwind of smoke." 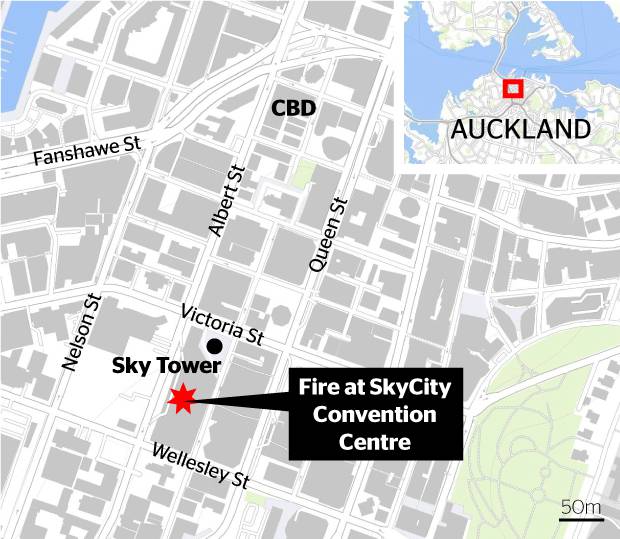