A woman has been evicted from her flat for swearing in front of her landlord after he left a gate open and her beloved dog fled onto the road.

Vrnda Torckler, 27, says she was upset and fearful for her dog's life when she "dropped the F-bomb" [used the word f***] and never envisaged having her tenancy cancelled as a result.

But landlord Vincent Calzone is defending his action, claiming Ms Torckler's language was symptomatic "of a personality type" he did not want in his house.

The Tenants' Protection Association says Ms Torckler may have a case for "retaliatory action" against the landlord in the Tenancy Tribunal.

"I was having a total freak out," Ms Torckler said. "I did drop the F-bomb at least twice but I wasn't directing it at anyone. I was just frustrated at my inability to control the situation."

Two days later she received a series of text messages from Mr Calzone about her language. One called her swearing "disturbing" and "not normal behaviour".

He said she had three months to vacate the flat.

Ms Torckler, a fulltime office manager, insists she is an otherwise model tenant, has never missed a rent payment, is "house proud" and has excellent references.

She was "not a particularly profane person", she said. "I believe [swearing] should only be used in situations when it's really warranted, otherwise it becomes a linguistic crutch."

Though she regretted swearing in front of Mr Calzone, "I wouldn't have thought it was a hanging offence".

Ms Torckler no longer felt comfortable in the flat and planned to move out as soon as she found another property that accepted dogs. 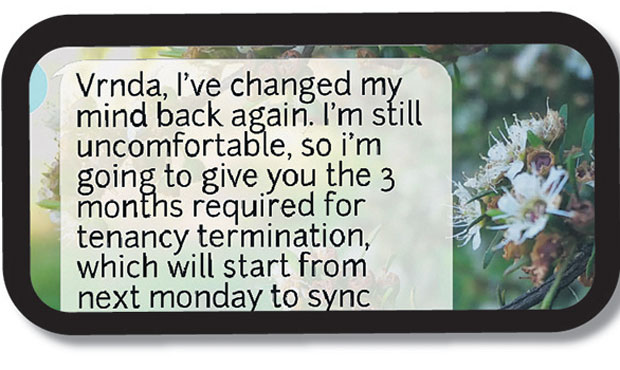 Asked if she planned to take any action against her eviction, she said: "I don't really know what action I could take because he's not doing anything that is not within his rights to do."

Yesterday, Mr Calzone defended his stance, saying Ms Torckler's dog was unharmed and her language was a complete over-reaction.

"You can't act like that and I don't have to tolerate it. I don't want that sort of person on the property."

Asked if he ever swore, Mr Calzone - who said "bullshit", "damn" and "hell" during the interview - said: "Yeah, sure, but I'm not saying the F-word."

Auckland Property Investors' Association president Andrew Bruce said the matter sounded like it had descended into an unfortunate personal dispute. "As a landlord, if I was going to do that I'd definitely want to have some just cause or reason."