The repair bill has hit the tens of thousands and is still climbing. Photos / George Novak

A "heartbroken" kiwi couple have been left more than $30,000 out of pocket after their rental house was trashed.

Kathy Roberts, of Mount Maunganui, showed the Bay of Plenty Times Weekend around the home in Papamoa she and her husband Mark had rented to a family for nearly five years.

Rubbish sits in large bags outside the property surrounded by flies. Piles of discarded possessions - shoes, chests of drawers, balls, clothing and other household items - resided in bags and boxes. 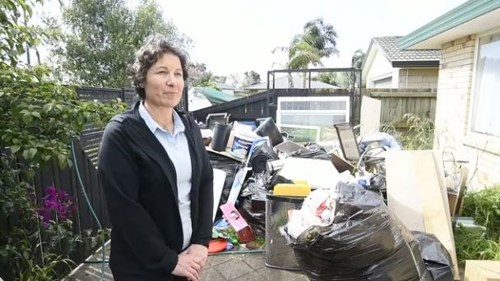 Holes in the walls have since been plastered over.

Cigarette butts had been tipped on to the carpet, which held layers of dirt and an unknown smeared brown substance.

Mould and grime coated windowsills, fixtures and fittings. The lounge smelled heavily of cigarette smoke, though the lease specified no smoking.

The repair bill has hit the tens of thousands and is still climbing.

The couple did not have landlord insurance, so they would be out of pocket thousands of dollars for cleaning, rubbish disposal, dump fees, new toilets, locks, new paint, carpets and curtains.

Including lost rent, the quotes and bills already paid total $35,364.

Mrs Roberts said the ex-tenant rented the three-bedroom, two-bathroom house with a partner and two teenaged children from December of 2011, paying $340 per week. They decided to increase the rent to $370 in April of this year.

"They were really polite, well-spoken, respectful. Then all of a sudden - no reply."

Records filed with the Tenancy Tribunal showed the tenants had not made any rent payments for more than two months, since August 4.

The landlords said after years of regular inspections, efforts to access the home over the past couple of months had been unsuccessful.

Results of tests on the home for methamphetamine were expected next week.

When the Bay of Plenty Times Weekend contacted the ex-tenant by phone, she said: "I'm not interested in talking with you."

A Tenancy Tribunal order dated October 12 terminated the tenancy and ordered the tenant to pay nearly $2000 in overdue rent - thelandlords received the remaining oustanding rent, $1360, from the bond.

Mr Roberts said he and his wife had rented to about a dozen families during the past 25 years and most tenancies ended in the way they should.

"A tenant decides to move on and leaves the house in a pretty good state after paying up and leaving on good, friendly terms.

"This is the first time we've had to evict someone through the Tenancy Tribunal ...
"It's heart-breaking, really."

Mr Roberts said he had not previously done credit checks, something he would likely change.

"We relied on asking and talking to previous landlords ... it's a bit too relaxed for this day and age, apparently." Rentals BOP manager Gary Prentice said tenants did not normally damage homes.

When it happened, he said it was usually after being given a 48-hour order by the Tenancy Tribunal to vacate the property.