Ten journalists are among those killed in cold blood by masked gunmen who've stormed the office of a satirical newspaper in Paris.

Charlie Hebdo's editor-in-chief, Stephane Charbonnier, and the cartoonists known as Cabu, Tignous and Wolinski are among those killed.

A cartoonist at the newspaper has told local media she let the gunmen into the building, after two men threatened her and her child.

She sheltered under a desk as the shots rained down.

As Sky's Rhiannon Mills reports, the woman says the gunmen spoke perfect French and claimed to be from Al Qaeda.

"Now that's something that hasn't been confirmed by anyone in authorities in France. The interior minister was asked whether this was an Al Qaeda attack and he simply wouldn't answer that question."

Mills says the French President is calling it a terrorist attack.

"Francois Hollande, the president, was on the scene soon after the attack speaking about how there was no doubt this was a terrorist attack and that every effort would be made to find those.

"And we understand that the gunman were calling out the names of some of those people sitting in that room and one by one shooting them dead.

"It was obviously a very planned, a very organised terror attack."

Francois Hollande is due to address the nation at 8am (NZT). 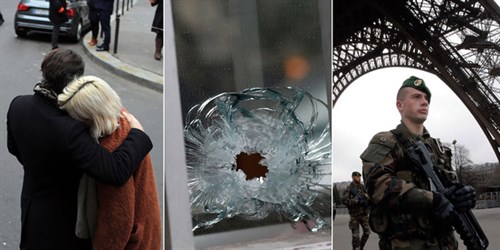 The execution of a police officer is among the horrific scenes captured in a string of videos posted online in the aftermath of the Paris newspaper massacre.

Clips recorded by eye-witnesses on smartphones showed two masked gunmen dressed in black firing what appear to be rifles as terrified onlookers fled.

One video circulated on Facebook shows the two gunmen stood next to a Black Citroen car firing at distance at a police officer stood on the pavement on a tree-lined boulevard.

The camera then pans to show the officer, now wounded, on the floor clutching his leg and raising his arms in an apparent gesture of surrender.

The assailants march towards him before one shoots him casually in the head at close range.

In footage filmed from a nearby rooftop one of the attackers can be heard shouting "Allahu Akbar" - meaning God is the greatest. 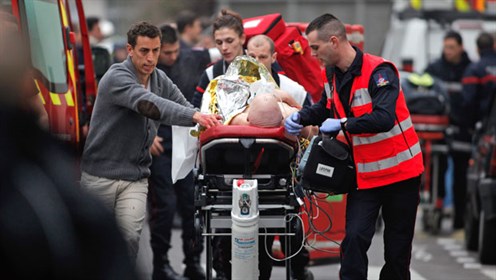 At least three gunmen are on the loose and France's security alert is at the highest level.

Two policemen have also been killed and another four people are in a critical condition.

Nina Ognianova from the Committee to Protect Journalists has condemned the attack.

"This horrific event in Paris today shows that the threat to journalism and to freedom of expression and freedom of speech is indeed a global threat."

Paris' deputy mayor Patrick Klugman told CNN the city will not be scared into submission by terrorists.

"We must take all the measures to protect the population, to higher the level of protection, but also to continue to live.

"If not the terrorists will win the battle and this we cannot accept."

Author Salman Rushdie - one of the first people to feel the weight of religious terrorism - has denounced the “religious totalitarianism” of the attack.

He says religion, which he describes as a medieval form of unreason, when combined with modern weaponry becomes a real threat to our freedoms.

Rushdie says we must all defend the art of satire, which has always been a force for liberty against tyranny, dishonesty and stupidity.

For this and other up to date stories visit newstalkzb.co.nz