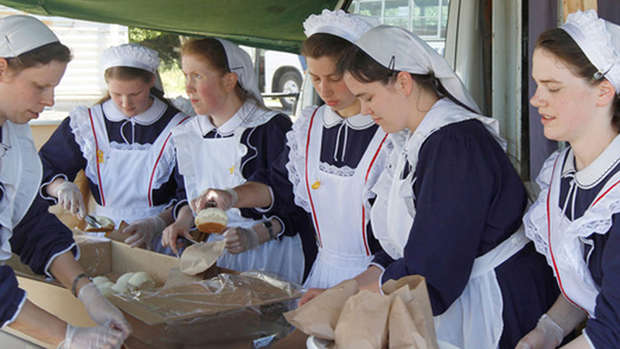 A mother of 11 from the Glorivale community has died after being swept away in a swollen West Coast river.

A source told the Herald that the woman, Rejoice Steadfast, had been watching the raging Haupiri River yesterday with family members when the bank collapsed and she fell in the water.

"It is an absolute tragedy," they said.

Rejoice Steadfast is the daughter-in-law of Gloriavale secretary and treasurer Fervent Steadfast.

The Haupiri River flows by Gloriavale, a remote Christian community, in the West Coast's Grey District.

The area was hammered with heavy rain yesterday, with some weather stations in the ranges recording more than half a metre of rain, causing widespread flooding and slips.

Police this morning said a Search and Rescue team had recovered her body at 8am.

Her death has been referred to the coroner.

Elsewhere on the West Coast a bridge has collapsed and dozens of students are trapped as a wicked storm continues to pelt the region with heavy rain.

Parts of the West Coast received over half a metre of rain in the past 24 hours, with more rain and even snow on the way in the South Island.

Just an amazing illustration of moisture advection (transport of moisture) from the sub-tropics and tropics to the South Island of New Zealand.

This is the fuel for the heavy rain for the west of the South Island with flooding a real concern along/west of the Alps.

A severe weather warning remained in place for parts of south and central New Zealand today as a front moved across the South Island, reaching the lower North Island this morning.

MetService meteorologist Nick Zachar said some weather stations on the West Coast had recorded over half a metre of rain in the past 24 hours.

Ivory Glacier on the West Coast topped the charts at 550mm, while many other areas in the ranges received similar amounts. That is more rain than Auckland has had in the past four months.

While the weather was on an easing trend there was still plenty to come.

"We are still seeing quite a bit of rain about Hokitika and south of there, some stations on the West Coast have had 40mm an hour, and heavy snow is starting to fall in the Canterbury high country. Mt Cook Village is starting to see some decent snowfall," Zachar said."

"This is all adding to river levels and increasing the risk of flooding and slips."

READ MORE:
• This is what the bi-annual Gloriavale concert is ACTUALLY like ...
• Former Gloriavale member Aaron B Courage speaks out about controversial community

Road snow warnings were in place for many South Island alpine passes this morning. Arthur's Pass (SH73) could see as much as 12cm of snow, Porters Pass (SH73) 15cm, Lindis Pass (SH8) 8cm and the Crown Range Rd a light dusting.

There was also a moderate risk of elevated thunderstorms over northern Westland, Buller and western Nelson in the early morning, and a low risk over the remainder of Nelson.

As the front moved north it would be replaced by a cool southerly change. Christchurch would see its high drop from 29C yesterday to just 11C today. Kaikoura, which topped the country yesterday on 31C, would drop to a cool 14C.

The cold front would move over the North Island from midday Friday and clear the island by Saturday afternoon.

Easing trend for the weekend. We just have to get past the Friday. Rain Saturday morning on the North Island but easing after that to be cool with a few showers. Check your forecast at https://t.co/Yjbq0jxdqz. GK pic.twitter.com/nEX2AuI6fk

The rain over the North Island would mostly fall from late Friday to Saturday morning, followed by a few showers lingering into the afternoon.

Anyone attending the Taylor Swift concert in Auckland Friday evening was advised to keep an eye on the forecast and consider taking a poncho or raincoat.

On Sunday, showers would pepper the North Island where it would be cool, while a fair amount of sunshine over the South Island would allow the temperatures to recover to the high teens.

Cloudy, and possible drizzle. A period of rain at night. Northerlies dying out at night. 20C high, 12C overnight.