An Imgur user named mattim0s is going viral for posting a text message exchange between him and a gay man, and people are loving it.

Mattim0s, a straight dude whose first name is Chad, was having fun at a wedding reception when a gay man named Shane approached to give him his number. While Chad could have reacted with hostility as some straight men do when they are pursued by gay guys, Chad was flattered and applauded Shane's bold move.

Chad sent Shane a kind text explaining that he is taken but appreciated the effort it took to ask out a perfect stranger: 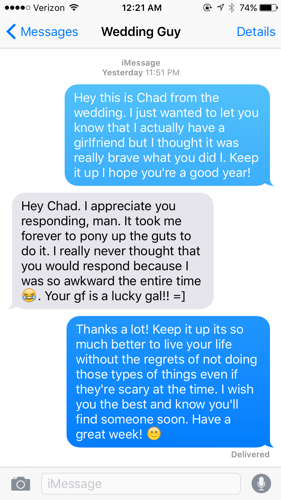 "Without knowing if I was straight or not he had built up the guts to put himself out there. I thought it was extremely brave and I know it's something I wouldn't be able to do."

Chad added that the point of posting the text message screenshot was to encourage everyone to fearlessly go after their desires.

"I'm sharing this to remind everyone to live their lives without regrets. Almost all of my regrets come from the things I didn't do, not the things I did. I will be living my life more like this man and I suggest you all do as well."