Quakes, floods and slips had a lot of people wondering - what's next? Some Kapiti Coast locals got their answer last night when a tornado struck.

Police were alerted to the tornado in the Waikanae area at 7:25pm.

A police spokeswoman said the tornado caused damage to trees and a street sign on Te Moana Rd in Waikanae. There are also reports of damage to the roofs of several houses.

Herald photographer Mark Mitchell said the twister appeared to have hit a construction site on part of the Kapiti Expressway.

He said it "ripped through trees" and brought down branches. 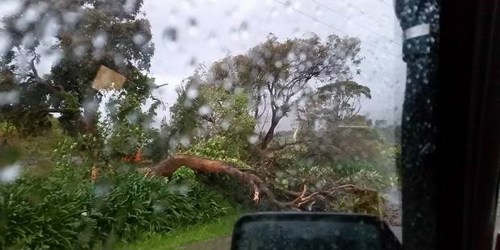 Residents have taken to social media to say the tornado tore through their properties.

A resident contacted the Herald to say their "very heavy" double gate had been picked up and blown across Te Moana Rd.

The council has been notified.