Having successfully taken out Breakthrough Artist at the last year's ceremony, Broods well and truly established themselves as a dominant force in New Zealand music by taking away four Vodafone New Zealand Music Awards, following the star-studded ceremony at Auckland's Vector Arena.

The brother and sister duo of Caleb and Georgia Nott took out the Album of the Year award for their debut album Evergreen, along with Best Group, Best Pop Album, and the Radio Airplay Record of the Year. 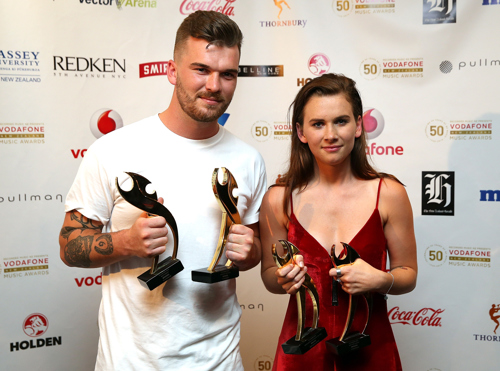 The pair, who are originally from Nelson, have had a steady rise to fame since first being noticed performing as part of the Smokefree Rockquest back in 2011. They joined up with producer Joel Little (the man with the golden touch it would seem, given his success co-writing and producing with Lorde also) and quickly gained both local and international attention with the release of their self-titled EP in January 2014.

They've since been caught up in a whirlwind of lengthy international tours, performing with international luminaries like Sam Smith, Ellie Goulding, Haim, and others, but somehow managed to write and release Evergreen late last year.

Speaking to the Herald on the red carpet before the awards show, Georgia said she was more nervous than excited about the evening, but her nerves turned out not to be necessary.

The pair were clearly humbled by their awards, paying tribute to their manager Ashley Page, to Little who they likened to being their third sibling, and of course to their family, having later enchanted the audience with a rousing performance of their single Mother and Father.

"Thank you mum and dad for teaching us how to play guitar and sing, and thank you to all our extended family, I know they're probably watching tonight," Georgia said after winning Best Pop Album, before closing off by thanking the duo's fans for getting them to where they are.

The rest of the awards were spread across an impressively wide range of acts.

Rising alt-country star Marlon Williams took away two Tuis, for Best Male Solo Artist and Breakthrough Artist of the Year, off the back of his acclaimed self-titled solo debut, and wowed the audience with his stunning, stripped back performance of Dark Child.

"Thanks so very much for deeming me appropriate to win this award, it looks so cool and I will never give it away," he joked after winning for Best Male Solo Artist.

Before the show Williams told the Herald he was nervous about the long wait to hear whether he'd won any of the gongs he was up for, but the thought of performing live during the show didn't phase him.

"Performing I know how to do."

Gin Wigmore grabbed the Best Female Solo Artist gong for her recent, raw and personal album Blood To Bone, and Lorde was not forgotten, taking home the Single of the Year award (for the third year in a row) for her Hunger Games soundtrack single Yellow Flicker Beat. 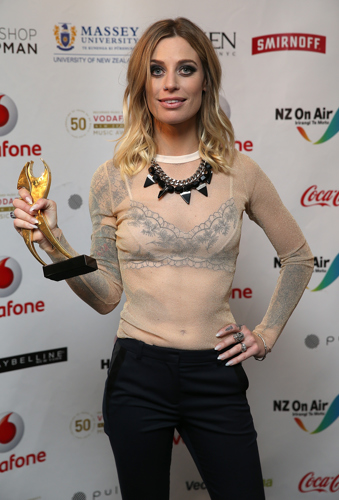 Wigmore gave a shout out to all her fellow women in music, acknowledging how tough it can be for women to be taken seriously in the industry, something she said she wanted to do because of her own experiences as a woman making a career in music.

She prefaced her show of solidarity with a cheeky dig at friend Anika Moa, who was also nominated in the category, shouting a friendly "up yours Anika," into the crowd.

Moa responded by flipping Wigmore off and laughing.

Unknown Mortal Orchestra, who recently won the 2015 Apra Silver Scroll, and were nominated for Best Album and Best Single, took away the Tui for Best Alternative Album for Multi-Love - an award which they also won in 2013 for their previous album II. 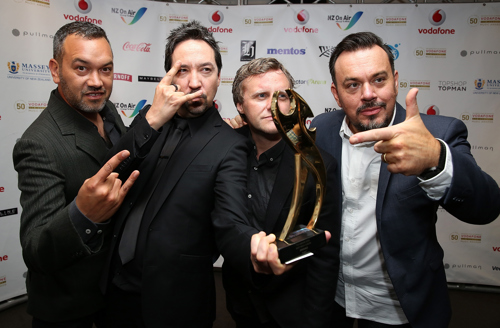 Six60 were in line for a potential eight awards at the ceremony, but were edged out in every category except for the People's Choice Award, which they happily thanked their fans and supporters for. 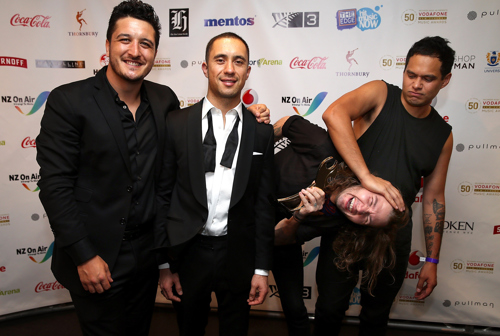 The night was topped off by a moving tribute to The Exponents, with Neil Finn presenting the beloved Kiwi group with the NZ Herald Legacy Award, and inducting them into the NZ Music Hall of Fame before Dave Dobbyn and Tami Neilson lead a truly celebratory version of party classic Why Does Love Do This To Me?

Tributes to the late Jonah Lomu, who died days before the award ceremony, were scattered throughout the night, with radio DJs Mike, JJ and Dom paying tribute to the rugby great during their presentation for best pop album.