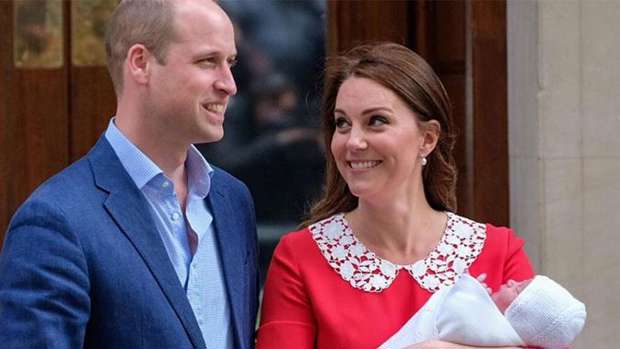 Did the Duchess really need to face the world so quickly after giving birth?

As the Duchess of Cambridge emerged from hospital clutching her newborn son, mothers everywhere simultaneously thought two things: "nice work, mamma bear" and "ugh, imagine having to wriggle into that dress and get your hair done so quickly after that".

Kate surfaced from the Lindo Wing of St Mary's Hospital in London at 6pm London time, a mere seven hours after he gave birth to the new prince at 11am. She looked as fresh as any person possibly could after pushing another human out of her body. But raises a question: Couldn't she have been given a day or two to get her wits about her, and enjoy that fog of dreamy newborn bonding before she had to paste on her best princess smile and front up to the world?

Couldn't she and William and the couple's older two children, George, 4, and Charlotte, 2, have spent a little more time on their own, blissing out over their new family member before it was back to business as usual?

The Duchess had been violently ill for her pregnancy with hyperemesis gravidarum, a debilitating form of morning sickness. Couldn't she have been allowed a day or two to let her battered body recuperate before it was time to be on again?

Think about it. If Kate had the baby at 11am, it would have been at least 1pm before everyone was cleaned up, medically tested and hosed down.

If her birth was anything like anyone else's, the new baby would have been placed on her chest and Kate would have spent time trying to coax him to feed — assuming she chose to breastfeed. Even after having two other children, breastfeeding isn't necessarily something that happens easily. It can be hard and it can hurt.

She would have been exhausted and delirious after pushing her son out. We don't know if she had an epidural or any other drugs, but if she did she would have all the mental faculties of a raver who'd been at a dance party for three days straight.

But no time for that! By 3pm at the very latest, an army of primpers and dressers and their associated hangers-on would have descended, fussing about with blow dryers, nail buffs and nude lips and padding the poor woman from here to the colonies with a fortress of sanitary pads to guard against any unfortunate accidents in front of the media.

Kate would have sat through hours of hair and makeup to make herself tidy for the rest of the world. She would even have had to force her poor post-partum belly into that fussy little red shift dress and her swollen feet into those wretched nude pumps she has such a puzzling devotion to.

If she was lucky, she would have done a few practice rounds of waving serenely while balancing newborn — and then she'd be whisked out the door and into a wall of flashing light bulbs as every media outlet on earth jostled for a glimpse of the exhausted new mother and her fresh new hair. Sorry, heir.

If you look hard, you can see exhausted eyes and a very tired smile behind all that cheery waving. Surely deep down the poor woman just wants to get into some trackies and ugg boots, chug a glass of celebratory champagne, and catch up on Neighbours.

Of course, I understand it's her job to be Princess Barbie. Smile, wave, birth child, repeat. She knows what she signed up for and has never shown even the slightest falter or hesitation in the performance of her duties.

She is in many ways just a vessel. As the official Kensington Palace announcement put it: "Her Royal Highness The Duchess of Cambridge was safely delivered of a son," which makes it sound as though Kate merely ordered her son via Amazon and sat round waiting til DHL dropped him off on the doormat.

But ultimately, she's a person. She's a mother. She has the same lightning strike of the purest, fiercest love that all of us feel the moment we lay eyes on our newborn child. You can see in the way that she interacts with her eldest children that motherhood comes naturally to her, and she loves those babies like any other human mother, not like a custodian of the heirs to the throne.

It's difficult not to feel a pang of sympathy for her being denied that fresh baby newness for just a little while longer, not to mention some time to let her poor body recover.

Thankfully, once Kate and William and the new baby emerged from the hospital, the smiling-and-waving part seemed to end relatively quickly, and the new parents were whisked back to their apartment at Kensington Palace, hopefully for some special time together.

"Thank goodness one can now kick off one's dreadful nude pumps and put on one's uggies," Kate might have said as she flopped through the front door of home and switched on the telly.