No resource or building consents have been granted for a house on the site. Photo- Reagan Schultz / NZ Herald

A 12m wide sliver of land wedged between two houses is up for sale in Ponsonby has a price tag that’s almost too ridiculous to believe.

The plot, which is a mere 31m long, sits at 73 Richmond Rd, where spare land is rare.

It's being marketed as a "vacant site for your grand design" on a 374sqm half share of a cross-leased plot.

"This is an exciting opportunity for you to seize one of the last vacant sites in Ponsonby," Barfoot & Thompson's advertising material reads. 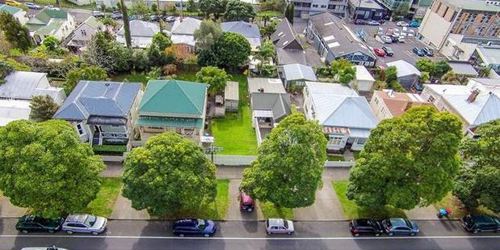 The property is on a cross lease, meaning the owner will need the approval of their neighbour to make any changes to shared spaces, and some alterations to dwellings.

The site was for sale by tender, which closed on Thursday. However, the land remains up for grabs.

According to a council planning department spokeswoman, no resource or building consents have been granted for a house on the site.

The residentially zoned area is a "special character zone", the spokeswoman said. This meant any dwelling built there needed to be "sympathetic to and consistent with" other original character buildings in the area.