Viewers tuning into the BBC's News at Ten got an eyeful when a woman exposed her naked breasts on a computer screen - just yards behind presenter Sophie Raworth.

A BBC worker, who was wearing headphones and slumped in his chair, was spotted watching the woman remove her bra in the raunchy movie scene.

Ms Raworth, 49, was presenting a live piece on the England cricket team's victory over South Africa, but eagle-eyed viewers noticed the screen over her shoulder, according to the Daily Mail.

The actress was wearing a black jumper while standing over a man during the clip which could be seen on Monday evening.

In what is believed to be an action movie, she then removed her bra to reveal her breasts during the striptease.

A television source told The Sun: "This has gone down like a lead balloon at the BBC. It is totally unprofessional.

"It beggars belief a sex scene should be played live on air. The employee is on borrowed time when bosses catch up with him."

Viewer Lyndsey Robinson noticed the man watching the clip and posted a video of it on her Facebook page and wrote: "Did anyone else notice news last night on BBC??? 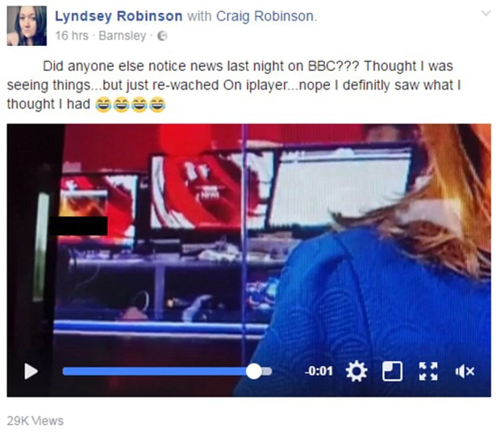 "Thought I was seeing things...but just re-wached On iplayer...nope I definitely saw what I thought I had (sic)."

The BBC said it is investigating the incident.

During their time at Broadcasting House in central London, BBC employees have been caught chatting, yawning, flirting and play fighting in the open-plan office.

In June, BBC News anchor Huw Edwards fell victim to a technical glitch on News at Ten and was seen twiddling his thumbs for two-and-a-half minutes.

He was unaware he was live on air and later tweeted a picture of a Welsh beer to celebrate getting through the shift.

On Monday, just hours before the striptease incident, newsreader Simon McCoy was heard sighing throughout his report on a dog surfing competition in California.

He continued to sigh his way through the report and his face fell in despondency when he said "here are the pictures."