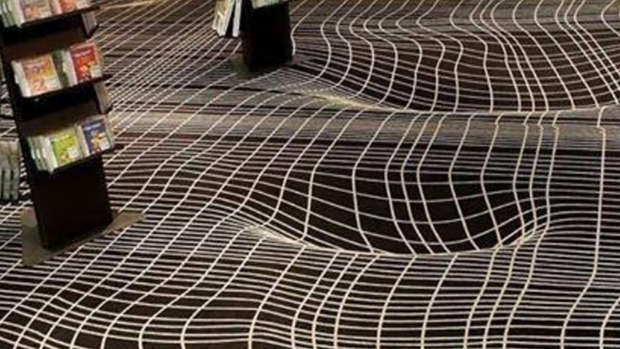 You have to see it to believe it, so the saying goes. But in the case of one very unusual carpet, seeing may not help at all.

This mesmerising black and white geometric patterned floor looks as if it is covering up huge craters underneath that are so big that you would be able to step into them, wrote the Daily Mail.

But it's all an illusion, as the ground and the carpet is actually flat.

Whoever designed this floor is evil. THATS A FLAT CARPET. pic.twitter.com/RGENHZJN81

The carpet - believed to be covering the floor at a branch of the French electronics shop chain FNAC - appears to be swelling, with large craters in the middle of the ground.

However the floor is in fact as flat as a pancake, and those holes are in fact created by the clever use of curvy lines on the carpet.

It was first brought to the attention of Twitter by the account WHS_Carpet, which tweets pictures of faded branches of WHSmith in the UK.

But it didn't go viral until the same picture of the curvy carpet was tweeted by Australian Youtuber Muselk.

Many said it would be hilarious if the carpet was in a bar or a pub, where intoxicated adults might be confused by the baffling illusion.

But others warned that the mesmerising carpet may in fact be dangerous to people suffering from dementia or epilepsy.