Tattoos have long been a way to express yourself, and thanks to new technology, they could soon allow you to add an extra dimension to your body art.

Skin Motion is an app that creates tattoo designs from audio clips, which can be played back via your smartphone, reports Daily Mail.

The futuristic technology, which will be available from next month, could allow users to memorialise loved ones who have been lost, by capturing their voices from existing recordings.

The app is the brainchild of Los Angeles-based tattoo artist Nate Siggard.

His app can create waveform patterns from audio clips up to one minute long.

The designs can be made up of any recorded sounds - whether noises, spoken words, music or a combination of these elements - which can then be tattooed on to your skin.

The app is able to read back the designs it creates via a smartphone's camera and play them back to you.

It will let you capture messages from friends and family, or even your favourite lyrics from a song.

Tattoo artist Nate Siggard, who is behind the app, is one of the first people to test it out. Photo / YouTube

The firm says that of the thousands of messages they have already received, the majority of inquiries have been about preserving the memory of people who have died.

While this unique combination of technology and art has prompted some sceptics to question whether the app is a hoax, its creator insists it will be the genuine article.

Speaking in a video on his website, Siggard said: "A lot of you have been asking whether or not it's real so I wanted to give you an example to show that it is.

"The app's in development right now, it'll be done in about a month.

"We're excited for everyone who is looking forward to getting one, so check it out. It's definitely real and it's coming soon."

Siggard and his partner are among the first to have tried out the technique, with impressive results.

The self-proclaimed designer, producer and entrepreneur chose to record his girlfriend's voice saying "I love you" as well as the sound of their baby, who was 4-months-old at the time.

The soundwave is accompanied by the phrase "Free Will". 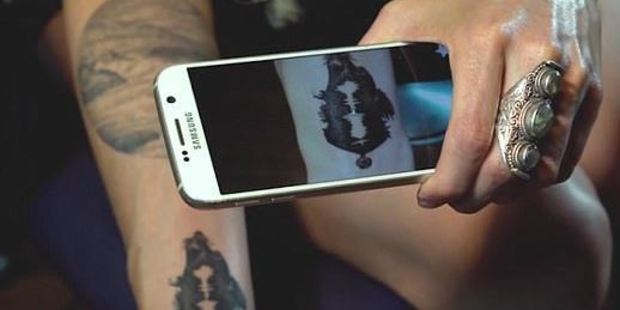 Juliano Damiano decided to immortalise her dog Baci by having an image of him tattooed on her forearm, along with a recording of his distinctive howl. Photo / YouTube

His partner Juliana Damiano was instrumental in the app's development.

According to the pair, the idea came to them when two friends got the opening line from Elton John's Tiny Dancer tattooed by Siggard.

Damiano suggested "wouldn't it be cool if you could listen to the tattoo?" and the concept was born.

She decided to immortalise her dog Baci by having an image of him tattooed on her forearm, along with a recording of his distinctive howl.