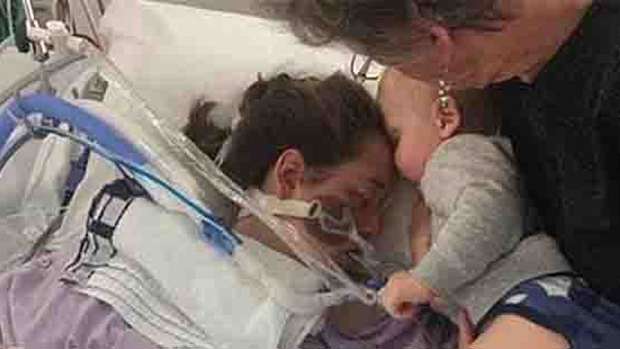 A pregnant Australian mother who was rushed to hospital with an ear infection and later died may have caught the deadly pneumococcal disease from her unvaccinated child.

Petrak had an emergency caesarean-section in an attempt to save both herself and her newborn daughter Eleanore, who was four weeks premature, however, the mother didn't survive.

According to the Daily Telegraph, Petrak's 17-month-old toddler was not vaccinated and was sick in the days leading up to her death.

The infection is covered by a vaccine that is on the National Immunisation Program Schedule and is recommended to be given to babies at two, four and six months.

There were 154 deaths from pneumococcal disease in 2004 which is passed on by touching infected people.

Since the introduction of the vaccination more than a decade ago, the numbers of pneumococcal deaths has reduced dramatically.

Husband John Petrak has opened up on the crushing loss and battle he faces as a solo father of two.

"Imogen's biggest dream was to see our daughter and she didn't get to do that. We knew we were having a girl and she was just aching to see her. She had all her dresses picked out," he told the Gold Coast Bulletin.

John said he's dealing with a raft of bittersweet emotions after welcoming his daughter into the world just hours before his wife died.

"The only way I can explain it was feeling every emotion at the same time. Worry, sadness, happiness, joy - everything all at once."

A GoFundMe page set up by family friend Renee King to support the family has raised $118,000.