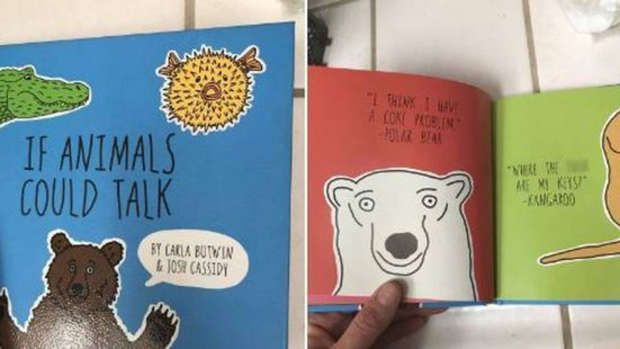 They say you should never judge a book by its cover and this US grandma is proof of exactly that.

The woman thought she was innocently buying just another children's book for her 6-year-old granddaughter's bookshelf but ended up going viral once her daughter Tiffany shared how hilariously inappropriate the book was.

"I'm dying. My mom bought this book for my 6-year-old and I just called to ask if she had actually opened the book. She hadn't," she wrote on Twitter.

I’m dying. My mom bought this book for my 6 year old and I just called to ask if she had actually opened the book. She hadn’t. 😂😂😂😂 pic.twitter.com/inYCEaZKpV

The book features a bunch of different animals including a polar bear saying "I think I have a coke problem," and a kangaroo looking in its pouch with the line "Where the f*** are my keys?"

The book, titled If Animals Could Talk, looks like a children's book but is actually for a more mature audience.

It is based on the popular Tumblr blog "If _____ Could Talk", by Carla Butwin and Josh Cassidy.

While at first glance it looks like an innocent purchase and a suitable gift for any child, one quick look through the pages reveals an inappropriate gift for such a young girl.

Responding to hundreds of people on Twitter, Tiffany shared a few more snapshots from the book.

"I couldn't even talk when I called her. Here's the first page," she wrote. It showed a cute fluffy little chick saying "Aight, let's tear the roof off this mutha f*****!"

The grandchild reportedly got to see the book and, looking through the pages, reportedly told Dad, "I don't even know what this means."

The grandmother was reportedly - and understandably - "mortified".

After the tweet went viral, the book sold out on major chains, including Amazon and Book Depository.