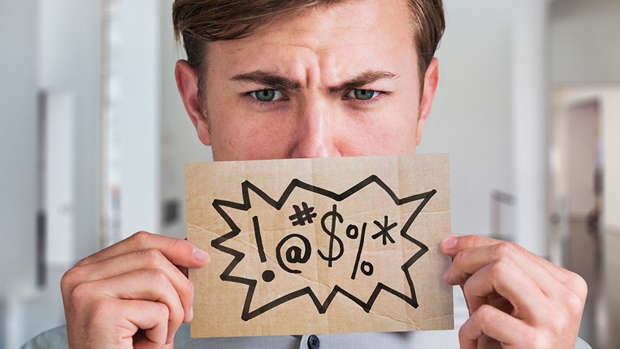 It's the excuse we've all longed for - swearing is good for you.

Shouting expletives helps to mend a broken heart by diluting the intensity of pain, a new study suggests.

Using words that would make your mother cringe relieves the psychological burden caused by breaking up with a loved one, reports Daily Mail.

But researchers say profanity's healing powers, when used as a distraction, can also apply to other slightly more common scenarios.

They found swearing works in aiding what they define as "short-term social distress" - anything between a lovers' tiff to social exclusion.

But it is possible to overdo it. Using too many expletives may weaken the power of profanity when you need it most, experts from New Zealand claim.

The Massey University results mirror various studies which have shown curse words to have the power in relieving physical pain.

Lead author Dr Michael Philipp said: "There is still speculation about why swearing aloud has the effect it does on physical pain and social pain.

"What's clear is that swearing is not a completely maladaptive reaction to a sore thumb or a broken heart."

How was the study carried out?
The researchers split 62 volunteers into two groups for the latest study - swearers or non-swearers.

They wanted to test the theory that both physical and emotional pain stem from the same underlying biological process.

Participants were asked to write about an inclusive and happy experience, or an exclusive and distressing one.

Those in the swearing group were asked to repeat a random expletive for two minutes before rating how much pain they were in.

Volunteers in the other group done the same but with a much more harmless word.

What were the findings?
The researchers found non-swearers who were asked to write about a distressing event reported more pain.

They also showed greater sensitivity to physical pain, the results published in the European Journal of Social Psychology show.

Those who were given the opportunity to swear said they had less social pain when asked to recall the traumatic experience. No heightened sensitivity to physical pain was evident.

The findings suggest that both social and physical pain are similar, and that swearing reduces the effects of social pain.

But don't get too excited...

However, the researchers were quick to point out that swearing is not a quick fix for people experiencing serious emotional pain.

And Dr Philipp said people should be aware of who else is in their presence before they unleash a torrent of blasphemy.

Research in 2014 revealed people who frequently swear are more likely to have a bigger vocabulary than their clean-tongued peers.

A colourful tongue does not mean the talker is lazy or uneducated, the study published in the Language Sciences journal found.

Instead, those who are more confident using taboo words are more articulate in other areas.

Kristin and Timothy Jay, the Massachusetts College of Liberal Arts psychologists who co-wrote the study, said it proved swearing was positively correlated with verbal fluency.

"We cannot help but judge others on the basis of their speech," they wrote.

"Unfortunately, when it comes to taboo language, it is a common assumption that people who swear frequently are lazy, do not have an adequate vocabulary, lack education, or simply cannot control themselves."

In their conclusion, they added: "The overall finding of this set of studies, that taboo fluency is positively correlated with other measures of verbal fluency, undermines the [normal] view of swearing."