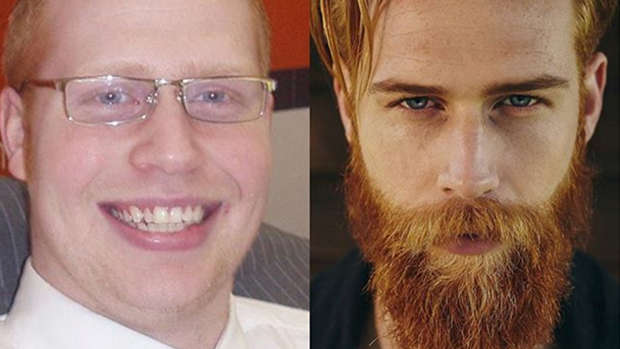 An overweight insurance salesman is unrecognisable after shedding nearly 7 stone and growing a trendy beard which has helped catapult him to modelling fame.

Gwilym Pugh, 33, from London, has gained fans across the globe thanks to his distinctive ginger facial hair and has even been snapped up by David Beckham as the face of his whisky and grooming ventures.

The Cardiff-born GQ model, who previously operated a life insurance company from his spare bedroom, piled on weight while working from home and was prevented from training due to a knee injury, according to the Daily Mail.

But he has since dropped from 20 stone to 13 stone 7 lbs to become a successful model who has graced the pages of GQ magazine, working with brands across the world including Belstaff, Diesel and Bud Light.

So today has been an absolute whirlwind!! I woke up with a banging hangover after the @vo5 @nmemagazine awards to news the article about my personal journey has pretty much gone viral around the world 😱 I’m so incredibly grateful to everyone commenting kind words and supporting me, I think it’s easy to criticise people, especially online, but it’s 2018 and we need to start lifting each other up! Literally anything is possible, even if you’re not aware of it yet. . . PS.. huge thank you to @instagram for making my journey possible!! . . . . . . . #beforeandafter #transformation #gingerbeard #weightloss #fatlossjourney #redhead #gingerhair #gingerman #igtransformation @instagram

Speaking about his overweight years, Gwilym, who set up his own business in 2006 at the age of 21, said: "At that time I was pretty overweight, working 12 hours a day, plagued with injuries which meant I couldn't train at all."

"The business was doing okay, but I decided I needed to get my life in order and wanted to get healthy again," added Gwilym, who is also a Vo5 ambassador for the NME Awards.

After forming a folk band with his friend several years ago, Gwilym's barber urged him to grow some facial hair to look the part.

In keeping with his new look, the musician decided to clean up his diet and cut out takeaways - but the biggest difference came when he quit his desk job.

Blue steel.... 👀 Who did it best? 😂 With @davidbeckham’s for the launch of @house99 last week at @harveynicholsmen. Scroll across for few more photos from the evening! . . . . . #BlueSteel #house99 #hometoyournextlook #davidbeckham #futbolmiami #harveynichols #beckham #beardstyle #mensstyle #ad

Gwilym, who lost weight over the space of five years, explained: "It was the best thing for my health as I stopped sitting for nine to 10 hours a day."

As the weight started to drop off and the now-famous beard started to grow, "shy" Gwilym set up an Instagram account which boosted his following and helped him get spotted by Welsh tailor Nathan Palmer.

Gwilym, who is now signed with top London agency AMCK Models, was then photographed for a coffee table book, 100 Beards, and was part of the Red Hot Photography project - two gigs that helped his career go stratospheric.

Since then he has worked on campaigns for Vans, Bud Light, Diesel and he's also worked closely with David Beckham thanks to his Haig Club whiskey project, as well as being an ambassador for Beckham's new male grooming brand, House 99.

Reflecting on his newfound fame, Gwilym said: "Having worked in finance for years, the opportunity to work with creative people and travel around the world is amazing. But you forget how nuts it is, it all becomes normal.

"I think I'm lucky I got into this profession at the age that I did. I try not to get caught up in it all and my girlfriend helps a great deal with that."

A keen photographer, Gwilym is hoping to make his own mark on the world with his pictures, taken while travelling the globe.