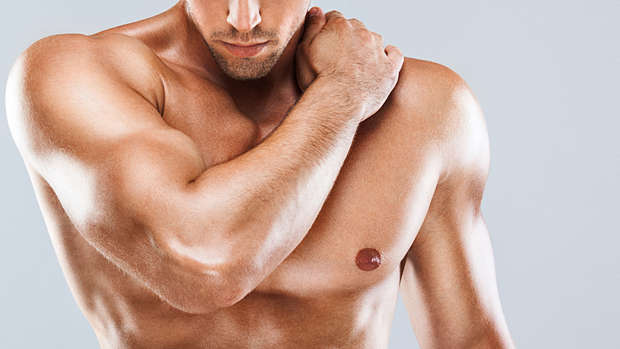 It's not bulging biceps or ripped pecs that men need to worry about when trying to attract a woman but their bellies, researchers have discovered.

Scientists have found that women check out a man's midriff more than any other part of the body, according to the Daily Mail.

Doctors from Geneva University Hospitals asked male and female volunteers to look at 120 photographs of people in swimsuits - and to rate those of the opposite sex for sexual desire.

While they were viewing the images, eye-tracking technology was used to see which part of the photograph they were looking at, and for how long.

The research found that both sexes spent longer looking at the body than at the face.

But women looked at the abdomens of the men more extensively than the chest or pectoral region, which was, in turn, viewed more than the genital area. Females also homed in on the abdomen longer and more frequently than males.

For their part, men spent more time scanning the chest area of the women than the abdomen and the genital area.

But males looked at the genital area more often than women.

In the study, published in scientific journal Sexology, researchers said: "These exploratory results help open up new perspectives in identifying the visual features that play a part in sexual desire.

"Both men and women explored the body longer than the face," they added.

Previous research has suggested that the male abdomen may be a visible marker of testosterone levels.

It has been suggested that large amounts of belly fat may be linked to low levels of the hormone, which may be associated with a reduced sex drive.

A previous study carried out at the University of Gothenburg in Sweden reported that abdominal fat increases with age and decreasing testosterone concentrations.