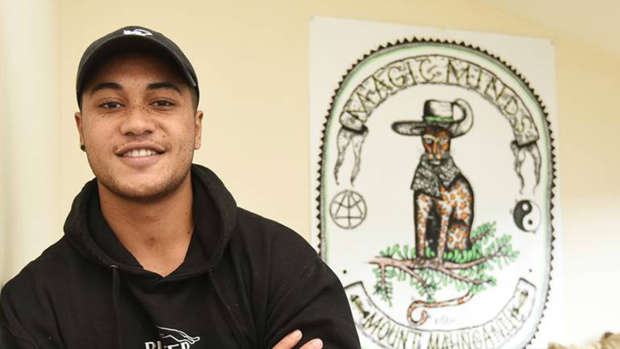 He opens the door after my third knock. It's his smile you notice first - boyish and charming. He's got a smattering of freckles across each cheek and he's clutching his cellphone.

It's not until he moves, and ushers you into the staircase that leads to the second floor, you notice that on his left shin is a misshapen mass, that bulges like a deflated rugby ball.

He threads his way over to a couch and sits down. The cellphone is still in his hand, and he thumbs in a message, lost in his thoughts.

When he looks up, his dark eyes look tired. He's staying with a friend in Mount Maunganui and the bottle caps on the floor, and a blanket on the couch, hint at the past 24 hours.
He apologises, and runs a hand through his hair.

It was his ex-girlfriend on the phone, and the reason he delayed answering the door.
Actor, James Rolleston, is slowly counting the things he's lost since the accident that nearly claimed his life in July, 2016.

More than a year on, he's still recovering, and still awaiting sentencing on August 31.

You find yourself feeling for Rolleston. He is impeccably polite and honest. His injuries are plain to see. He's wearing shorts, and his white socks are pulled up to his shins, but they don't hide the scars.

This is our second attempt at an interview. The first was meant to happen two months ago but when I turned up to meet him on June 8 in Papamoa (his 20th birthday), he'd forgotten. His memory is still affected by the head trauma he sustained after he and friend Kaleb Maxwell hit a bridge in Rolleston's uninsured Toyota Altezza near Opotiki. He's admitted a charge of dangerous driving causing injury.

Rolleston had to be cut from the wreckage and airlifted to hospital, spending a month in Waikato Hospital's intensive care unit.

His relationship with Maxwell, who now lives in Australia, is "tight as", despite Maxwell breaking five vertebrae in his spine and having an operation on his sternum. "He's back playing rugby, which is mean."

Rolleston suffered a traumatic brain injury. He has rods in both tibias and his right femur. A graft had to be taken from his left thigh for his left shin. He has a metal plate in his right forearm.

Of the scar on his leg: "[It] won't go down any further," he says, rubbing the mass. "I can't feel anything right there... no nerves there. It's a bit painful around it."

He's excited to get behind the wheel again, because he doesn't remember crashing. "It felt like an overnight sleep. I was confused as [when I woke], and asked them if there was anyone else in the car... I was pretty cut up, eh. I was crying."

More than a year on, he can't run. His balancing is off. He gets tired and often needs a daytime nap. He's had to relearn how to walk, talk and basic motor skills.

He's living with his auntie and cousin in Auckland and up until our interview, had been sitting at home, while they were at work.

He's now working part-time as a retail assistant, alongside his cousin, at Recycled Boutique in inner-city Auckland, which he says "has been good for me," although he's "knackered" come the end of the day.

"I just want to get back on track." Acting wise, things have been quiet. "It's not like how it was."

In saying that, he's done a film since the accident. A Kiwi comedy, The Breaker Uppers, with actresses Madeleine Sami and Jackie van Beek.

"Learning lines wasn't really an issue, everything else was terrible because my memory is totally shot now."

Which is why he missed our first interview?

"Yeah, that's a perfect example. I'm getting into a routine now...I always set alarms and appointments [on my phone] to remind me... I'm just trying to get my feet firm back on the ground and hoping work will pick up more."

He finished speech therapy a couple of months ago, which was a huge "confidence booster," but is continuing physiotherapy.

He's had support from friends, family and fellow actors, but is anxious whether the public's perception of him has changed.

He gets stopped on the street, but now he's "grown up" looks wise, it happens less. I still get the Boy thing," he says of the Taika Waititi-directed movie that shot him to stardom in 2010.

Perhaps what's not widely known about Rolleston, is that fiction met reality in Boy, which tells the story of an 11-year-old East Coast kid trying to make sense of his world - and the return of his absent father.

In real life, Rolleston, who grew up in Opotiki, has never met his father and doesn't know his name.

Despite this, he had an "awesome" upbringing in the care of his mother, Angela, and grandparents, Joe (Pops) and Christina (Gramps) in Opotiki, and two half-brothers Tevita, 23 and Maafu, 27, who have a Tongan father.

He did a short stint as a kid in Auckland, and also Tauranga, attending Tauranga Boys' College for most of Year 10.

A country boy at heart, he loves hunting and diving. At his school ball in Opotiki, he arrived via horseback.

In October, 2011, the first time I met and interviewed Rolleston, his grandmother, Christina Rolleston, told me her grandson found it difficult after his rollercoaster ride with Boy.

Publicity had been hard for a kid from a "very quiet rural area''.

"He is extremely sensitive [and] found himself at the mercy of the media. The film didn't end after he walked off stage.''

Success came hard and fast. He grew up a cheeky, smart kid. "I was always real playful, but I was super shy. A lot people freak out when I tell them I'm quite shy. Now, since the accident, I'm opening up a bit."

Getting a lead role in Boy, was the pairing of good fortune and fate. A casting director came to Opotiki Primary School and asked a few of the students if they wanted to audition.

"Me and my friends put our hands up. A little bit like 'should we get out of class for a little bit?'"

He can still do the famous Michael Jackson moves that he busted out in his retro shorts in the film. "They're a bit rusty, eh. People always ask me to do them but I get too embarrassed."

After Boy, he won a recurring role on a series of advertisements for Vodafone, and a short called Frosty Man and the BMX Kid.

Roles in the te reo drama The Dead Lands and the true-life tale of gang life, the Dark Horse, followed, as well as Pork Pie (his favourite film to date) earlier this year.

"They've been all amazing rides."

He'd love to do a Maori battalion film. He idolises Cliff Curtis, Brad Pitt, Denzel Washington, and Will Smith.

"Everything was given to me at a young age. I didn't have to work too hard [for movies]. I didn't go to drama school... I didn't really know what I had, until it was almost taken away from me.

"What young teenager wouldn't want to be doing what I'm doing? I just took it all for granted, you know? Having to start back at square one has been real tough. Just being at home, beating myself up as to where I could've been."

Right before his accident, he had an audition for an American film and unbeknown to him, two days after he crashed, his manager was told Rolleston had been given a lead role.

"I can't remember what it was," he says of the film. "I've never asked my manager about it. [Fellow Kiwi actor] Cliff Curtis was telling me. Cliff [and I] have the same manager so he was communicating with Cliff."

He'd still like to work in America. "Just got to see what happens, eh. I've not giving up."

He remains hopeful that his story from here on in, includes more positive anecdotes. He found himself fighting depression after his accident, and still has "down days".

He frequently visits Mount Maunganui and Papamoa to see friends. Just two months out of his teens, he's learning about life the hard way.

A few days after his birthday in June, ex-girlfriend Ayeesha Taylor, who left New Zealand to live in London in May, posted to Instagram about the trials the couple faced after his accident.

"Being in a relationship with someone whose emotions, memory, ability to empathise and have perspective, organisational skills, speech, temper, motivation and much more is compromised is almost impossible."

He says: "She told me what she was writing, and I was like: 'Yeah, go for it.' And then after a while, I told her it was a bit personal some of the stuff. I had a bit of a think over it."

Together for a year-and-a-half, she was supportive through his recovery, and is "an awesome girl".

"It was my first relationship so I was deeply in love. I was on the phone to her when you knocked on the door. That's why I took a while to get down. We're still really close."

A one-hour documentary, released by Attitude TV, about Rolleston's brain injury and road to recovery, will screen in a Sunday special on TVNZ in October. He'll be filmed at Opotiki District Court next Thursday.

He runs his hand over his left shin, and says: "I just have to face the music."