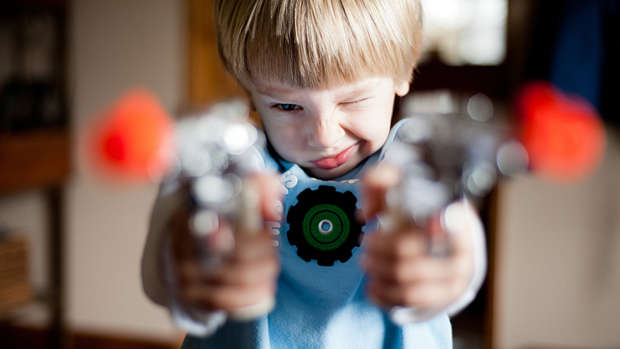 One of New Zealand's biggest childcare chains is launching cardboard-cutout guns and targets to teach gun safety rules to preschoolers.

Evolve Education, which runs 130 childcare centres plus the Porse and Au Pair Link home-based companies, says the gun safety kit has been developed particularly for about 40 rural preschool centres in areas where hunting is common.

"This is very much around communities where little boys will go hunting with dad in the hunting season and it's part of life," said chief operating officer Fay Amaral.

But Dr Sarah Alexander of the early childhood advisory group Child Forum said she was shocked by the kit, which will be available to download free online internationally.

"For the first time in New Zealand we'll have a large early childhood organisation that has declared itself to be pro-gun," she said.

"It could be a potential publicity stunt for Evolve to get its name in the media, but it could backfire from families who are not pro-gun."

Its gun safety kit, which will be available online at gunsafeforkids.com, includes:

All the materials include three rules:

Amaral said Evolve was asked to develop the kit by its Little Wonders childcare centres in South Canterbury and Otago.

"In those communities in particular there is quite a lot of deer hunting and duck hunting," she said.

"And secondly, a lot of young children do make-believe gun play all the time and a lot of us would have had a shared parent experience saying to our child, 'Don't point the gun at anybody's face' or suchlike."

She said the online kit was actually developed by the local branch of the New York-based public relations firm Y&R, formerly Young & Rubicam.

Dr Annette Henderson, an Auckland University psychologist specialising in preschoolers who was asked by the Herald to review the kit, said the approach was age-appropriate.

"When you first think about it, it does sound quite ridiculous, but when I did look at the general approach that we can't ignore kids playing with guns because they are going to do that at any rate, teaching them how to be safe with them fundamentally makes sense," she said.

"I think they are doing it in the right way, and I think that it works doing it with toys."

But she said the kit did not explain the reason for the safety rules.

"The emphasis is on those rules, but it's very important, even though they are for young children, that they understand there are explanations for rules," she said.

"There is a reason we do this, and it's because they could hurt people."

What do you think about the gun kits?