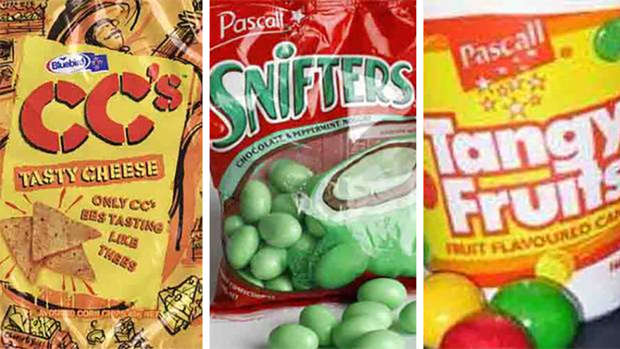 From the 1950s through to the late 2000s Kiwis were treated to a range of delicious chips and lollies.

While we still have plenty of goodies such as Pineapple Lumps, Caramilk and Munchos, a number of New Zealand's iconic snacks have disappeared from shop shelves.

Now going to the movies or having sleepovers just isn't the same.

From Tangy Fruits to CCs Corn Chips, here's a roundup of classic Kiwiana snacks that should be brought back from extinction. In 2009 Snifters was axed by Cadbury.

The Snifter snuffed it in 2009 when Cadbury decided to axe the Kiwi favourite.

The lolly, which had a peppermint nougat chocolate centre coated in a candy shell, was a definite winner to snack on at the movies.

Unfortunately, according to Cadbury, the decision was made to drop the iconic New Zealand lolly due to lack of consumer demand.

There was a wave of backlash following the axing with angry Snifter fans protesting in Dunedin and around the country.

A Kiwi also started a petition to bring the Snifter back, but the demands fell on deaf ears. They were damn tasty but often used to throw at friends during your outing at the movies.

Tangy Fruits rarely lasted a whole film and were considered perfect for the movies since there was no disturbing rustling sound to worry about when one reached for a second helping.

Production ceased in 2008, again due to a lack of consumer demand.

Ex-pats were furious with one person saying in 2009: "What! The end of Tangy Fruits? As an ex-pat Kiwi what I am going to feed my kids when I come home? I'd like to be able to say 'this is what real lollies are like - not that rubbish you get in Australia'." Two weathered packs of 'vintage' orange Sparkles were auctioned on Trade Me back in 2016.

Considered one of the "big three" along with Snifters and Tangy Fruits, Sparkles faced the chop in 2008 due to lack of consumer demand.

But that didn't stop Kiwis expressing their anger.

In 2016 a Trade Me user auctioned off two packets of orange Pascall Sparkles.

For what used to be the cheapest item at the local dairy, the bidding started at $10 per pack.

The black market of classic Kiwi candy has come to Trade Me in the past: In 2008, 20 packets of Sparkles were sold for over $50 each. Toppa ice cream made a reappearance in 2014 for a limited time only.

The vanilla ice cream coated with a strawberry shell was a strong Kiwi favourite during summer time.

The humble Toppa was launched in the 1950s and was a mainstay in the New Zealand market until the 2000s before it disappeared.

The strawberry favourite made a return to stores in 2014 for just a limited time before the classic ice cream was withdrawn from dairies.

With summer baking our skins and drying our mouths, many of us could do with a classic Toppa right now! Biguns came in four different flavours and was a staple item on every kids' sleepover menu.

It wouldn't be a sleepover without a packet of Biguns!

The school lunch and sleepover favourite were available in four flavours including Cheese, Cheese and Bacon, Bar-b-q, and Tangy.

Local legend has it that Tangy was the most popular flavour before the Biguns brand disappeared from shelves.

In 2016 Bluebird did bring back cheese-flavoured Biguns for a limited time but again the Kiwi classic disappeared from all existence.

What wasn't fun about these little snack packs?

Dunking your delicious kangaroo biscuits in chocolaty, refined sugary goop was considered a perfectly acceptable lunch time snack. Those were the days. CC's corn chips were a staple in Kiwi kids' lunchboxes.

In 2010 CCs corn chips were being cut from supermarket shelves and replaced by a locally made version of the American brand Doritos.

Bluebird Foods, which makes the chips, was believed to have conducted blind taste tests in which Doritos proved more popular.

CCs had been a staple snack in lunchboxes around the country since the 80s and their extinction was met with fiery backlash.

"I, like many Kiwis, grew up with CCs, and to this day they remain my favourite snack food," a CCs fan told the Herald back in 2010.

"Kiwis wouldn't sit quiet if L&P were replaced by some inferior substitute, so why should we be forced to give up the chips we grew up with?

"If nobody speaks up now, what will we do when Marmite, pavlova or Watties' sauces are replaced with their American alternatives?"