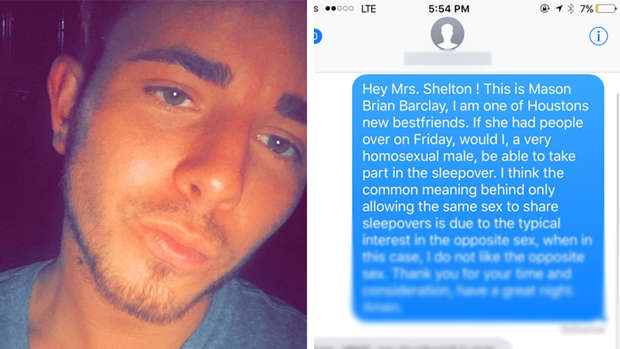 Mason Barclay, who describes himself as a "very homosexual male", wanted to attend a sleepover at his best friend's house.

Knowing that boys are not normally allowed to attend teen girls' sleepovers, the teen boy decided to send his friend's mum a polite text message, asking if she'd let him attend.

"I am one of Houston's best friends," he wrote to Houston's mum. "If she had people over on Friday, would I, a very homosexual male, be able to take part in the sleepover?"

He carried on explaining why he should attend: "I think the common meaning behind only allowing the same sex to share sleepovers is due to the typical interest in the opposite sex, when in this case, I do not like the opposite sex."

He was not expecting Houston's mum's hilarious open-minded response.

"Hmm. Well, my husband is hot. Should I worry?" she replied.

I TEXTED HOUSTONS MOM TO ASK IF I CAN STAY THE NIGHT FRIDAY HAHAHAHAHA pic.twitter.com/Ovr74V869W

The internet loved her response.

I think I'm in love with her mom

Literally just choked on my coffee from laughing about this. Best mom response ever

That took guts, and this mom acknowledged it *fabulously*! I wish you a fun night with your friends! Stay away from Houston's dad, now. 🤣💖

The Herald hasn't been able to confirm whether the sleepover ended up happening on Friday night and whether or not Houston's dad is, in fact, hot.