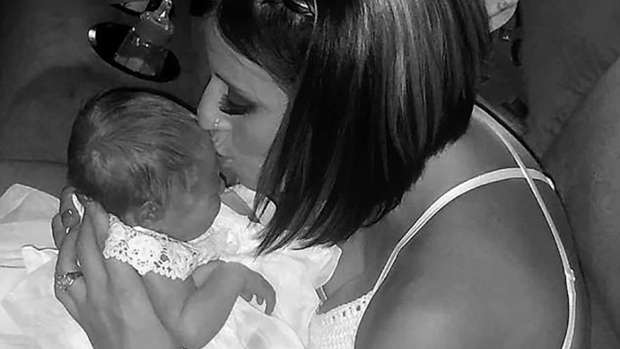 An Iowa couple had to announce the heartbreaking death of their 18-day-old baby daughter, who has succumbed to a herpes infection contracted through a kiss.

For Shane and Nicole Sifrit, this month was supposed to be brimming with joy, marked by the birth of baby Mariana, followed by their wedding celebration just days later.

But on July 7, two hours after the new parents exchanged their vows, their six-day-old infant was rushed to the hospital, having contracted a life-threatening herpes infection through a kiss.

On Monday, Nicole Sifrit said her baby's doctors at Blank Children's Hospital in Des Moines were running out of options to save her life, and just after 8.40am on Tuesday, Mariana lost her fight against the virus and passed away in her father's arms.

"She is now no longer suffering and is with the Lord," Nicole wrote in a Facebook post. "In her 18 days of life she made a huge impact on the world and we hope with Mariana's Story we save numerous newborns life. R.I.P. sweet angel"

The couple told the station WQAD that Mariana had become infected with meningitis HSV-1, which is caused by the herpes virus, also responsible for cold sores.

According to the Johns Hopkins Health Library, herpes meningitis can be caused by bacteria, and it can be transmitted by sexual contact or passed from an infected mother to the baby during childbirth, the Daily Mail reported.

In Mariana's case, however, both of her parents tested negative for the virus, raising the possibility that their daughter had caught the life-threatening illness from someone carrying herpes, but not necessarily showing symptoms, who had visited the family in the days after her birth and kissed her.

"They touched her, and then she touched her mouth with her hand," Mrs Sifrit explained.

"It's hard to pinpoint exactly how she caught the virus, but it's important people are cautious when they let anyone handle their babies."

Nicole, who also has an older daughter and two sons, delivered baby Mariana on July 1. On July 7, she and Shane got married.

But their wedding festivities had to be cut short after the newlyweds noticed that Mariana stopped eating and was slow to wake up.

The Sifrits left their reception and took the baby to Blank Children's Hospital to have her checked out. There, doctors made the devastating diagnosis of meningitis HSV-1.

"It immediately went downhill from there. Within two hours she had quit breathing and all of her organs just started to fail," Shane Sifrit told WHO-TV.

In the first 48 hours, the newborn had undergone a half-dozen blood transfusions, but her kidneys failed, requiring that she be put on dialysis, and her liver stopped functioning properly as well, which resulted in internal bleeding.

On July 10, Mariana was airlifted to the University of Iowa hospital, where teams of specialists went to work trying to keep the baby alive and stop the potentially deadly infection.

Nicole Sifrit has been posting regular updates on Mariana's health crisis on her Facebook page, along with devastating photos showing the tiny girl hooked up to a life support machine, with a tangle of tubes, IV lines and needles sprouting from every part of her body.

On Sunday, Nicole wrote on her Facebook page that she and Shane were told that if Mariana's liver does not repair itself, she will not be able to survive.

Then on Monday Mariana's already precarious condition apparently took a turn for the worse, prompting her mother to write: "My heart is crushed, my baby is declining fast! She has no brain activity and her lungs and heart are failing along with her kidneys and liver. They are running out of options for her."

She followed up two hours later with another post, calling on a higher power for a miracle: "I am still holding onto Faith and Hope! I have to even though they are running out of options that is my only option I have."

Had Mariana pulled through, the family were told by her doctors that she would have had long-term health complications with her brain, kidneys and liver because of the damage inflicted upon her vital organs by the infection.

In the midst of the terrifying ordeal, Nicole and Shane Sifrit are raising awareness about their daughter's condition and warning other parents to keep infants isolated.

"Don't let just anyone come visit them. Make sure they are constantly washing their hands.

"Don't let people kiss your baby and make sure they ask before they pick up your baby."

A GoFundMe campaign has been launched to help the Sifrit family with Mariana's mounting medical expenses. As of Tuesday morning, just over $3,700 has been raised.

The article was first published on dailymail.co.uk and is republished here with permission.