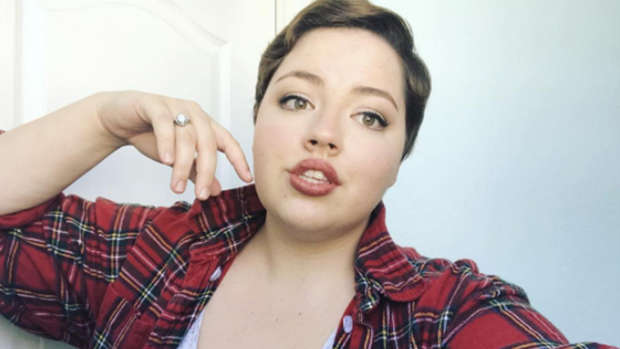 A plus-size woman who works as a life guard has revealed what it's like to have her capabilities doubted because of her size.

Courtney Harrough, 24, who works in Orlando, Florida, told Refinery29 how she received a backlash after qualifying to be a lifeguard, despite being a competitive swimmer and water polo player throughout high school.

While she was training for the job, she had one particular negative encounter that has stuck with her ever since.

'A woman my height, but three times smaller than me said, "I find it hard to believe you were an athletic swimmer,"' she said.

'If you're a plus-size woman presenting to a company, not just for an athletic-based career, you face a stigma that if you're fat, you're lazy.'

Of course, Courtney is far from lazy, and admits that she is used to proving people wrong when it comes to fulfilling her duties.

'The reality is that it's a physically demanding job, and you need stamina and resilience to keep up,' she said.

On Instagram back in March, Courtney described how even when she interviewed for the position of a deep water lifeguard, she was informed by the board of prospective employers that the job 'is rigorous and can be tiring at times'.

I'm not quite sure how to approach this subject without seeming hypocritical or self loathing. Still, I must be honest with myself and those who care to read my written work. My personal adventure through Body Positivity stemmed from sought healing after being raped and severe mental deterioration. I knew not who I was, nor whom my body really belonged to when my head hit the pillow each night. Over the duration of passing time I have gained a new respect for the level of strength a body can exhibit when relying of a joint effort of both resiliency and attempted love. This realization stemmed from both time to myself and by following the examples of many bod/fat activists on Instagram. Yesterday, as many of you may know I went to Seaworld - I knew there would be many new roller coasters I wanted to enjoy before heading home. Each attempt I made was met with adversity as my hips, and stomach did not fit in the seat or within perimeters of the body safety railing. Never before I have hated something so quickly...I could not bring myself to brush off the incident as people stared at me while fumbling off the loading dock, or how sad my friends were that I couldn't ride. I wasn't sure if I should hate myself, or the system. Today, I struggled to bring myself to eat food. I struggled at work. I am struggling writing this post now. The past few weeks have been spent working alongside a trainer so I can be in better level of physical fitness for my Lifeguarding job - this will cause me to lose weight ultimately- it is not the main premise of the trainer but it is a side effect of high impact workouts. Will I appreciate who I am after the weight comes off? Will o want to be in this body more so or less once all is said and done? I thought I loved my body, I truly did. Yesterday rot me to my core and exposed a falsehood within me that many may not have known, including myself, I have so much more to travel before I can say with assuredness that this body of mine is one I claim with pride and wonder.

'I answered with a resounding "I have no doubt I can rise to the occasion and swim with the best of them!"' she wrote.

'My weight and height may cause some to think that I'd only be a pleasantly perched beached whale upon a lifeguard stand - but that isn't the case. My body is strong, sturdy, and sexy! I don't have smooth legs, or cut shoulders accented by tiny boobs like most of the girls in my class but I have courage, and a spirit to try.'

Yet people's perceptions of her skills also weren't the only thing holding her back. Upon completing her training, she learned that their were no lifeguarding uniforms in her size.

They told her: 'You don't look like a regular lifeguard, we're going to have to pull you from your job.'

But Courtney was adamant, insisted that 'aesthetics' have nothing at all to do with her ability to do her job.

She told them: 'If you knew you couldn't accommodate, you shouldn't have put me through this. And you're not going to fire me, because that's discrimination. We're going to figure out how to get it done.'

In the end, Courtney made herself a uniform and got on with her job...

Now she has taken to encouraging others not to let their size make them feel like they can't follow their dreams.

'I would tell people that you can be a leader — of yourself and others — even if you're not fit,' she said.

'You can be so much more than what you think you can. Find your niche, your good people, and know that your body is your friend.'