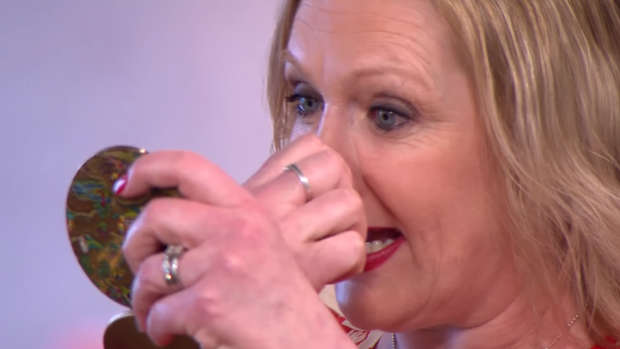 A woman who was diagnosed with an auto-immune disease after her nose began "collapsing into her face" has revealed how she now wears a prosthetic nose - that attaches to her face with magnets.

Brave Jayne Hardman, 48, left viewers of This Morning shocked after she removed the prosthetic nose without warning mid-way through an interview with presenters Eamonn Holmes and Ruth Langsford, the Daily Mail reported.

Hardman, from Redditch, revealed how she was diagnosed with an auto-immune disease following a collision with her pet dog CeCe in 2012 that caused her nose to swell and bleed and left her unable to smell.

The traumatic illness Jayne suffers with, known as granulomatosis, can prove fatal if left untreated and saw her undergo gruelling chemotherapy. 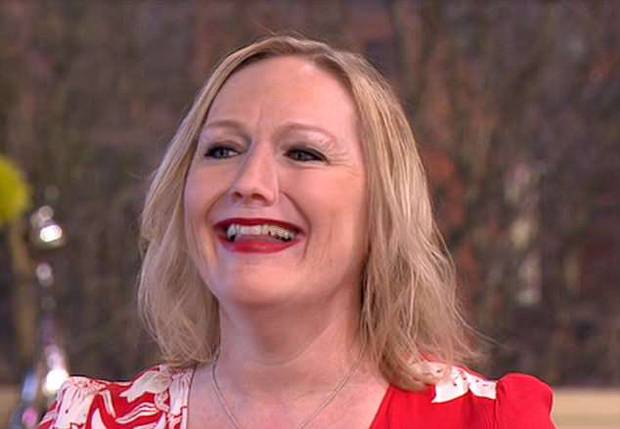 The mother-of-two told Ruth and Eamonn that even specialists were initially baffled by her nose swelling, which eventually caved into such an extent that she would walk with her head down in the street to stop people from staring at her.

Now fitted with a new prosthetic nose to cover the hole where her's once was, a smiling Jayne, who also appears on an edition of Davina McCall's This Time Next Year, told the duo that she takes off her nose every night before bed.

Ruth audibly gasped as Jayne then removed her nose, which still produces mucus, saying: "This is actually a nose that I take on and off, it's on magnets. I have sneezed it off once so I do tend to hold my nose now before I sneeze." 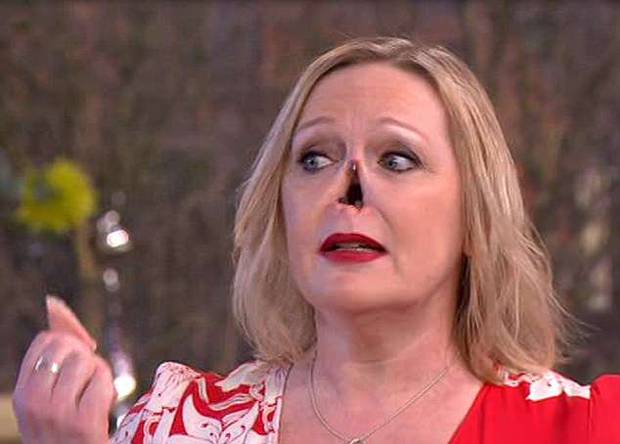 She also revealed that she wears a plaster across the hole, saying: "I'd hate for any spiders and stuff to climb down there. In the morning, I brush my teeth and I rinse my nose."

Jayne, who is a mother to Todd, 22, and Roman, 14, lost her ability to smell and taste during the first two years of her struggle.

However, thanks to the surgeons at Queen Elizabeth Hospital, Birmingham, both of the senses have returned.

She said: "I cried when I could taste tea, toast and jam again. I didn't like the idea that if we ever had grandchildren I wouldn't be able to smell them after they had their bath.

Watching at home, viewers were equally as taken aback. @0v3rcaffeinated wrote: "#thismorning should have given a bit of a warning before she pulled her nose off!"

@hannarawsthorne agreed, saying: "S*** me. Wasn't expecting her to just take her nose off."

@FunTimeFrankieD added: "What a brave woman!!! Imagine just losing your nose like that!"

@ForeverAYellow penned: "I think that stick on nose looks so cool! So realistic. #ThisMorning #ThisTimeNextYear"

What a brave woman!!! Imagine just losing your nose like that! #thismorning

#thismorning should have given a bit of a warning before she pulled her nose off!

In an episode of ITV1 show This Time Next Year, host Davina McCall is seen interviewing Jayne before the disease ravaged her nose.

The presenter then meets Jayne again after she's been fitted with her new nose, which she told Eamonn and Ruth she hand-picked after taking a liking to the nose of the lady who was charged with creating a new one for her.

Jayne revealed how the chance collision with her 14-stone dog CeCe, a Neapolitan mastiff had left her nose feeling 'odd'.

Dog lover Jayne says she now believes CeCe, who died in 2015, was trying to warn her about her nose, which would begin to collapse over the next year.

Her nose swelled, and would pour with blood but doctors struggled over the course of the next six months to find anything that could explain the problems.

Nearly two years after she began chemotherapy in June 2014, Jayne was finally told by doctors that the best course of action was to remove the nose completely. 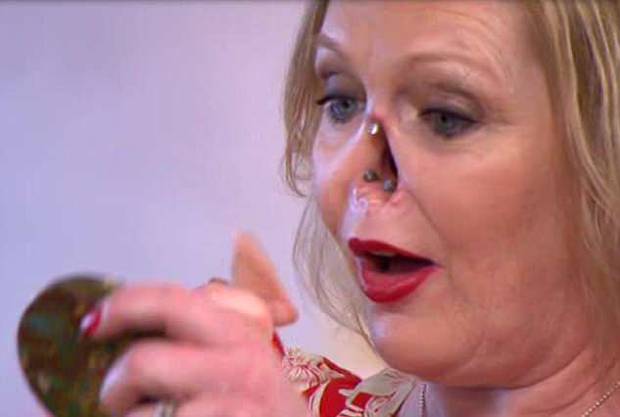 She described it as "the worst day of my life" but says most of her fears were allayed when she finally saw the prosthetic.

Initially thinking the implant would "make her look like Toy Story's Mr Potato Head", Jayne was pleasantly surprised to find how realistic they were.

Over the years, technicians have provided her with a selection of different noses matching her own skin colour, with a "summer nose" complete with a tan on order.

She loves her prosthesis so much that she now claims to prefer it to her original nose, which was "quite large" and lead to her being called "Concord" at school.

WHAT IS WEGENER'S GRANULOMATOSIS?

Most commonly, it affects the sinuses, lungs and kidneys, but can also affect the eyes, ears, skin, nerves, joints, nose and other organs.

For 90 per cent of people, the first symptoms appear in the respiratory tract (e.g. nose, sinuses and lungs) and include nasal congestion, frequent nosebleeds, shortness of breath and cough that may produce phlegm.

Many patients need chemotherapy drugs to suppress their immune system to keep their condition under control.

If it's not treated, it can cause permanent damage to some parts of the body, the NHS states, such as changing the shape of the nose.

Scientists are unsure about what the exact cause of Wegener's granulomatosis is - but believe it may be down to a fault in the immune system.