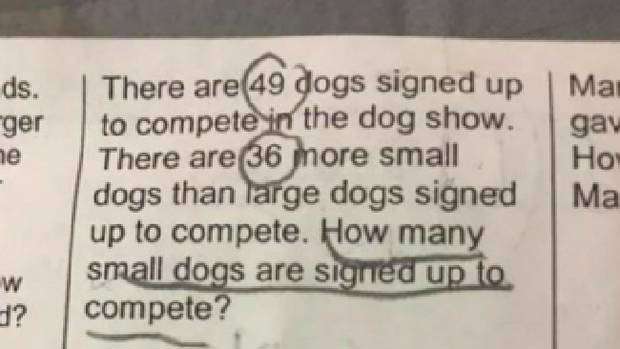 The internet has been left baffled by a real head-scratcher of a math problem aimed at seven-year-olds.

And while the problem appears hard to solve, the answer is equally confusing.

Angie Werner shared her daughter Ayla's math homework on a parenting group on Facebook asking other parents for help to solve the tricky riddle. Members of Werner's parenting group weren't able to provide much assistance, posting a variety of answers but most admitted to being left totally bewildered.

Thankfully, Werner was eventually able to put the masses out of their misery, sharing the teacher's answer to the tricky problem.

So if you guessed 42.5 then you are one of the few who figured out the correct answer, although you may still be questioning how half a dog gets on competing in a dog show.

Werner has since told Popsugar the school may have just worded the morbid question wrong: "The district worded it wrong. The answer would be 42.5, though, if done at an age-appropriate grade."

For those still confused, the problem can be solved by using the following equation.