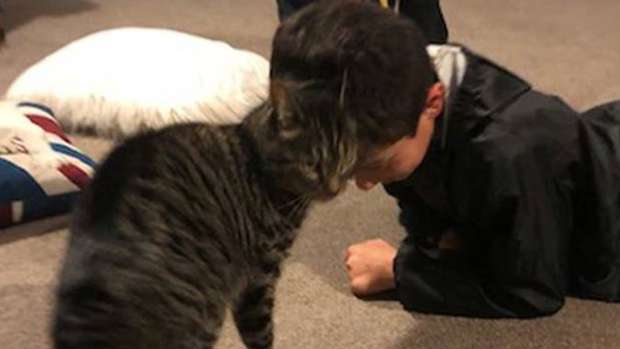 A cat who has been missing for two years has been reunited with his Wellington owner thanks to the quick-thinking of good Samaritans.

Two years ago Donna Murphy moved to Tawa, north of Wellington with her children and their cat Prime.

But just weeks after moving into the area the friendly and much-loved Prime disappeared.

One, then two then three weeks passed with no sign of Prime. Posters were placed around the neighbourhood but there was never any sign of Donna's fur baby.

"We have these big pine trees behind our property. He's known to go hunting and come back three days later. But this time he didn't," Donna told the Herald.

"Before we knew it two years had passed. I still have the posters now but I didn't think he'd return."

With his owners unaware, Prime had managed to cross a number of roads and the railway and set off on an adventure just 1.1km up the road where he set up camp for two years. 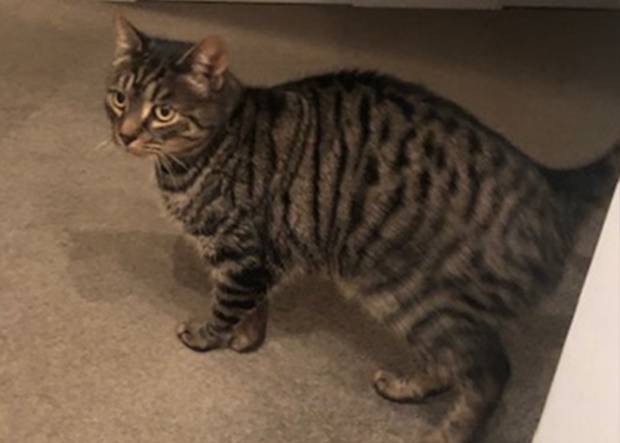 Unaware Prime was missing, Linden resident Jess Hill and her mum had started noticing a brave but standoffish cat hanging around their property.

For 18 months Prime had attempted to make himself a regular guest at the Hills' property, sneaking in for food and hanging out in the garden.

"He's been coming into our house late at night and trying to eat our own cat's food," Jess explained.

"Through that process, we've gotten sneak peeks of him and we intended to try and catch him to try and find his owner.

"We'd never managed to as he's an extremely fast cat."

Fast forward to last Sunday, and Jess had returned home from a holiday and was unpacking when she heard the sound of a cat meowing under her bed.

"I pulled the stuff from under my bed away and found the cat that had been coming into our house for the last one-and-a-half years eating our cat's food.

"After a bit of coaxing with food I got him out and he was really friendly and wanted lots of pats and cuddles. I managed to get him into the cage so we could get a picture and see if we could locate his owner."

After seeing Jess' photos on Facebook, Loose Leash Girls animal service and cat rescue owner EmJay Dette reached out saying she had a microchip scanner and could come around, scan the cat for free and find Prime's owner.

"I turned up, scanned the cat, and it came up with the alert saying the cat had been missing. Lucky enough I had access to the New Zealand Companion Animal Register so I got the details of the owner and gave Donna a call," EmJay said.

"I told her 'I believe I have your cat here'. She was kind of dumbfounded at first considering he was missing for two years.

"I said 'well he's not missing now, I've got him in a carrier, would you like me to bring him home?'"

Two years after Prime went missing, Jess, her mum, and EmJay went around to Donna's place to reunite her with her precious cat. 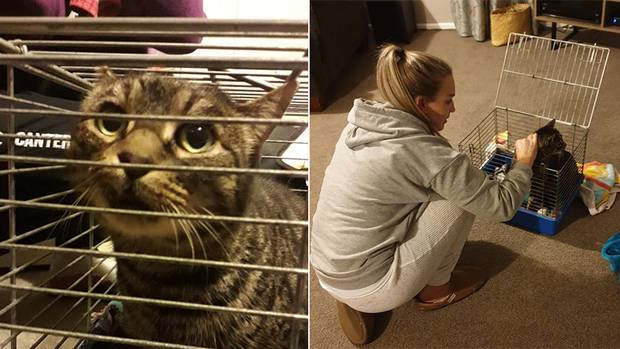 "I knocked on the door and said 'is this your Prime?'. Yes turned and said 'Yes, it's him, it's really him!'" EmJay asked.

"It's one of the best reunions I've ever done. It was amazing. I couldn't believe what was happening Sunday night. We usually deal with deaths of missing animals but this story just blew my mind."

Donna burst into tears the first time she spoke to EmJay after resigning herself to the fact she believed her cat was gone forever.

After walking into the lounge, Donna opened the cage and Prime came bounding out, head-butting his long-lost mum and showering her with affection.

"The people who caught him couldn't believe how much of a changed cat he was once he returned home and heard my voice and recognise the smell. Before he was scared but now he's the happy cat.

"He was headbutting me and was really happy. I was so surprised at how good he looked. For a cat that's been missing for that long I expected him to be in bad condition but he looks really good."

EmJay's Loose Leash Girls and cat rescue have been rescuing lost cats for a number of years and offer free microchip scanning to owners for their pets.

While often the rescues end in tragedy, EmJay says it's important to microchip your animals on the chance any missing pets can be reunited, just how Prime was.

"We offer advice and how to look after lost animals and what to do. We need to get our animals microchipped, especially cats. It's not as easy to get a cat home compared to a dog, so microchipping them makes rescuing them 10 times easier.

"It's just amazing to be able to get cats home to their owner and reunite families."